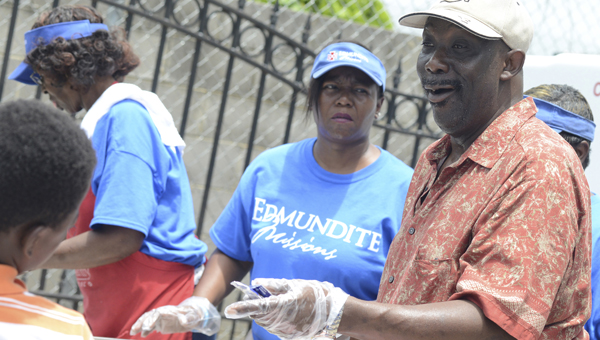 Charlie Ford, right, takes a lunch order while volunteering during the Community Cookout and May Festival Friday at the Edmundite Missions Center of Hope. (Jay Sowers | Times-Journal)

Togetherness was the theme during Friday’s Community Cookout and May Festival at the Edmundite Missions’ Center of Hope in downtown Selma.

“We wanted to invite folks out, bring together the community and our staff from all the different counties we serve, to be carefree for a while,” said Chad McEachern, president and CEO of the Edmundite Missions.

Johnnie Johnson is one of the hundreds of community members who Mission volunteers deliver a lunch to year-round, and she was more than ready to volunteer her time to make sure Friday’s event was a success.

“They started bringing me meals for lunch, seven-days-a-week, several years ago, and they’ve never asked anything of me,” Johnson said. “But when I heard about this event, I told them I’d be here. It’s great to see the children out here playing games and everybody together, eating, and having a good time.”

McEachern said organizers had prepared to serve free 1,000 meals during Friday’s event, which also featured games and activities for families and children.

Selma resident Donitha Griffin brought her children to Friday’s event, and said it was her mother’s idea to bring the entire family to the cookout.

“My mother said she wanted to come out with her grandchildren, so I brought my three kids along. I think this is a wonderful opportunity for them to not only spend time with their grandmother, but also with the community,” Griffin said. “It’s extremely important how much this Mission, this center, is constantly giving back to the community. Hopefully that will encourage other people, churches and organizations to give back to the community.”

McEachern said he hoped Friday’s Community Cookout would be the first of many to come.

“It’s fun to come out, play, and let everybody see the community in a different light,” McEachern said. “We would love for this event to grow and grow.”

The announcement this week that the Selma Lions Club is closing the old National Guard Armory to public use because... read more