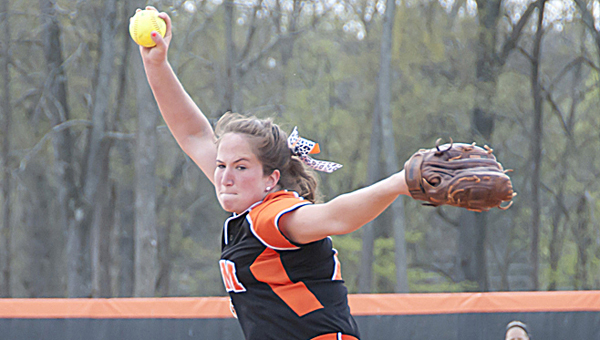 Daniels, who was named World Series MVP, entered the game in a two-out, bases-loaded jam in the bottom of the seventh inning. Daniels forced William Carey’s Hannah Cook-Kelley to ground out, ending the game and sending the Warhawks charging the mound to celebrate with their star pitcher.

“It is so surreal and so exciting. It is such a blessing to be a part of this team and be with everybody,” Daniels said. “I know we’ve said this a bunch but that whole tournament everybody stepped up. It was a team atmosphere and a team win.”

Daniels celebrated Thursday’s victory with a trip to the doctor’s office Friday morning for an MRI on her arm as she preps for offseason surgery.

Daniels was diagnosed with an avulsion fracture of the ulna, which is one of two long bones in the forearm, before the season, but chose to play through the pain.

After pitching 27 1/3 innings and going 3-1 in the World Series with a 1.54 ERA, the emotion of what she had been through and the magnitude of what she had accomplished started to sink in.

“It’s really fantastic because like I told my mom, I wasn’t even sure I was going to be able to play this season,” Daniels said while fighting back tears. “To be able to come through everything and be able to do that for my team, it is very emotional for me.  It was such a blessing.”

Daniels already has surgery scheduled for Tuesday morning and will start a rehabilitation process that will last at least six to eight months, depending on the surgery required. There is a chance she will need Tommy John surgery.

“Everybody asks if I’m scared that I may never be able to throw again,” Daniels said. But if I am never able to play again then I am glad it was after this year because we won it.”

Doctors recommended surgery before the season, but Daniels decided to wait in hopes of finding a way to contribute for the Warhawks.

Instead, she starred, making the NAIA All-American First Team after going 20-5 this season and pitching 174.0 innings.

Daniels struck out 230 batters and allowed only 3.83 hits per contest, best for fourth in the nation.

“It is crazy to think that I’m sitting here and that I helped,” Daniels said. “I like to think that I helped. It is very humbling, exciting and it is just crazy  … We did it. I pitched in the World Series with a messed up arm and it wasn’t horrible.”