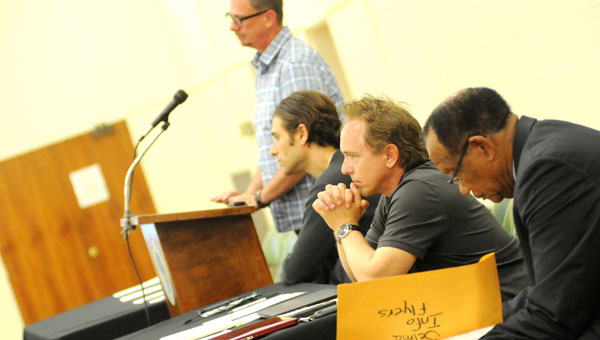 Most of the criticism was directed at the historical accuracy of the script. Though, most of the attendees knew little about the actual storyline.

Former civil rights activist Bruce Boynton, who founded the Freedom Riders and brought a case about discrimination on public transportation to the U.S. Supreme Court, was one of the many attendees who criticized the film’s methods of gathering historical information.

“My father and mother started fighting for black people to have the right to vote in 1928,” Boynton said. “It was the death of my father that produced the first mass meeting here in Selma. Nobody has said anything to me.”

When Hagan announced the crew didn’t plan to film at Brown Chapel A.M.E. Church, the whole mood seemed to shift.

The crowd audibly groaned and Brown Chapel pastor Leodis Strong swiftly rose to his feet, expressing frustration about his church not being included.

“We met extensively with you and some of your people relative to shooting at Brown Chapel,” Strong said. “We were left waiting to hear back from you guys. We never heard anything back, and then to come here today and to hear publicly that there would be no inclusion of Brown Chapel is a slap in the face.”

The movie’s staff and Selma Mayor George Evans tried to quell the apparent anger in the crowd. Perhaps criticism is common in movie town hall meetings. Regardless, Hagan and the movie’s production crew masterfully hid their emotions.

As city officials in attendance began to lower their heads in embarrassment, Evans briskly walked to center stage and chided the crowd, like a parent addressing a child.

“I believe that when company comes you try to show hospitality; you show them hospitality and show that you appreciate them choosing Selma,” Evans said.

It worked for a minute, but audience members quickly returned to questions of historical accuracy, informing Hagan and the movie production crew which families were pivotal in the civil rights movement.

Each audience member was sure to mention his or her family’s name in relation to civil rights contributions.

One audience member even asked if the movie production crew could invite celebrity actress Angelina Jolie to speak at a cancer banquet.

Selma, what were you thinking?

Evans and representatives from the Alabama Film Office said the movie originally hadn’t even planned to film in Alabama at all. Through the efforts of Evans and others, they coaxed the crew into traveling to Selma.

Instead of questioning motives and asking for money, Selma residents should be grateful for the movie’s presence in our city.

“Selma” isn’t going to solve all of our city’s problems in three days, but it could provide a boost in tourism. Asking questions is important, but it’s clear Selma’s residents weren’t ready to appropriately ask them Tuesday.

It’s disappointing the movie won’t include Brown Chapel and unfortunate the crew can’t travel to Marion and chronicle the death of civil rights activist Jimmy Lee Jackson, but we shouldn’t openly hurl insults at the movie’s crew in a public forum.

Sure, Selma is home to the Edmund Pettus Bridge and several other recognizable civil rights landmarks, but the crew could just as easily move to another filming location.

Dallas County should take advantage of right to vote

Every four years, voters turn out in relatively large numbers to choose a new president, but during the following election... read more