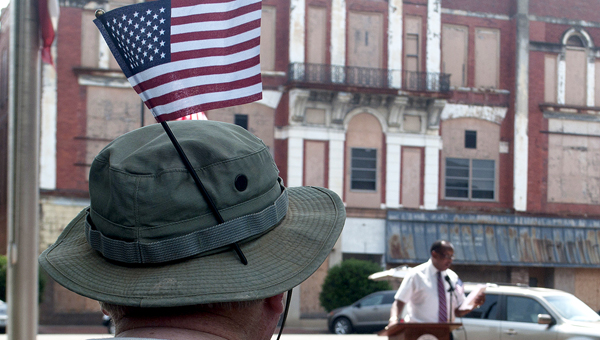 Broad Street remained somber and quiet as the names of fallen soldiers from Selma and Dallas County were read aloud in front of Selma City Hall during the fourth annual Moment of Remembrance Program Monday afternoon.

Several veterans graced the crowd of about 30 people, including Sonya McCall, who was touched by the service.

“It was a little emotional,” said McCall, who served on active duty in the Air Force during Desert Storm. “Though I never actually had to fight in battle, I was in the chaplain’s office, so I got to experience all of those that came home. I had the privilege of meeting the caskets of fallen comrades. Some you know and some you don’t, but they’re still your brothers and sisters. It means a lot.”

Mayors from surrounding cities were also able to participate in the service by saying a few words about what Memorial Day meant to them. Orrville Mayor Louvenia Lumpkin also had military ties, as she had brother-in-law who served.

“Oh my goodness, this service today touched my heart,” Lumpkin said. “A lot of times you put your loved ones on an airplane and you hug them and you kiss them, and sometimes you don’t realize that’s the last time you’re going to see them.”

While the program began later than intended, Kay Alsobrook, the director, said it went well.

“I am very pleased,” Alsobrook said. “I’m pleased with the turnout. I’m pleased with those who participated and were willing to give up their afternoon. We just wanted to show our love and respect for those families that their loved ones gave their lives for us.”

Selma Mayor George Evans came up with the idea for the program after hearing of other cities and counties who participated.

The service consisted of the reading of the names of fallen soldiers from Selma and Dallas County, as well as sirens being sounded across the city by different law enforcement officers.

Evans felt the program especially benefited those members of the community who may have lost loved ones to a war.

City government and ‘Selma’ move staff will have a town hall meeting Tuesday to addresses several topics about the filming... read more