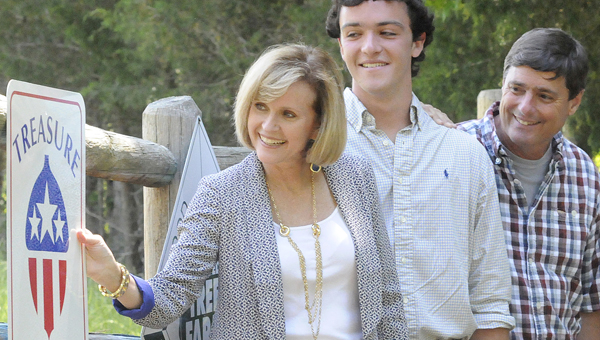 The years of hard work a Dallas County family has put into maintaining their farm has not gone unrecognized.

The King family received a Treasure Forest Award from the Alabama Forestry Commission for their well-kept private farm in Sardis located off of Dallas County Road 85.

Brigetta Jiles, with the Alabama Forestry Commission presented the family with a Treasure Forest sign and hat Tuesday to go with their award, which is given to private landowners who display their commitment to the Treasure Forest through physical management that takes place on their land, according to the organization’s website.

“It’s one of those accomplishments that you have in life that you don’t just accomplish it, but you pass it on to the next generation,” Craig King III said. “It’s a thrill.”

Jiles said it’s very important the commission recognize those who have put some much effort to ensuring their land is maintained properly.

“It promotes good forest practices, so hopefully other landowners will want to do the same thing,” Jiles said.

In 1997, King and his wife, Tammy, purchased the property when it was extremely overgrown and was in need of a lot of work, King said.

“At this time in my life, I have a 2 year-old son, and I saw the opportunity to teach him many core values from working on the land such as hard work, desire to be outdoors, and many more,” King said.

In 2008, pine beetles took over the family’ pine plantations forcing the family to clear-cut the area.

“My family and I saw this opportunity to rebuild the forest exactly how we wanted it, while doing it in such a way that it would benefit the wildlife,” King said.

With some help from his son Craig King IV, King III did lots of prep work before replanting the farm area, which included planning what would be planted and where.

“There is not an inch of this property where there is not a memory that has been created through some sort of expense,” King said. “It may be planting a tree or seeing the first buck that you’ve every seen in your life or quail or turkey.”

“After all of our hard work, it’s a great to honor to be recognized by the state as a treasure forest,” King said.