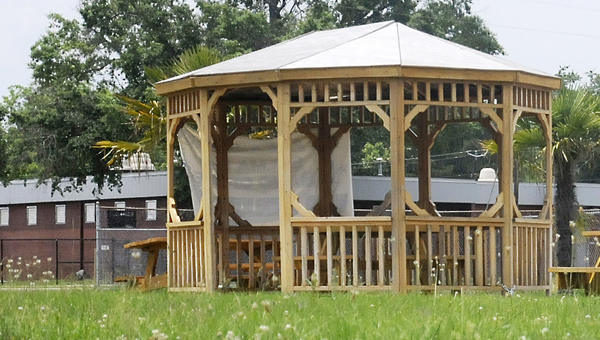 A gazebo behind Selma High School in the Ward 5 walking trail is one of several city council expenses in 2014 from its oil lease funds. (Josh Bergeron | Times-Journal)

Each year, the Selma City Council invests in infrastructure projects, using thousands of dollars generated from gas wells along the Alabama coast.

As of Feb. 28, the council spent nearly $18,000 on various projects in the city limits. Projects range from purchasing gazebos to roadwork on Dallas Avenue. The only expense on most council member’s finance reports is to the U.S. Geological Survey for a river gauge underneath the Edmund Pettus Bridge. Only four council members — Michael Johnson, Sam Randolph, Greg Bjelke and Cecil Williamson — spent oil lease money within their ward, according to finance documents.

Johnson’s ward-specific expense paid for two gazebos on a Ward 8 walking trail. Johnson said the oil lease money allows him to make improvements to his ward that he couldn’t afford to pay for with other city council funds.

“I am trying to make Ward 8 what it used to be,” Johnson said. “I shopped around and got the best deal for what I got — two gazebos. I was just looking to give people a place to relax in the shade.”

Gazebos were also a part of Randolph’s oil lease expenditures ending Feb. 28. He spent $1,500 for a gazebo on a walking trail behind Selma High School and $275 for a picnic table, which is also inside of the walking trail.

The walking trail is named after Alexis Hunter, a Selma High student who was murdered in the area in December while walking with friends. He purchased the gazebo before the walking trail’s dedication to Hunter and the picnic table afterward.

Both purchases and the walking trail’s creation came after his ward residents expressed concern about driving to Bloch Park just to exercise, Randolph said.

Bjelke spent $5,000 on closing the intersection of Mallory Drive and Dallas Avenue.

“We all had this neighborhood meeting and Mallory Drive was a spin off from that,” he said. “People were speeding and cutting across from Hooper [Drive] to get to Dallas Avenue.”

“We just have a major drainage problem out here,” Williamson said. “Anytime it rains, those places flood pretty easily.”

Council President Corey Bowie doesn’t represent a particular ward and doesn’t have any ward-specific expenses. Since the Times-Journal obtain council member’s finance reports, Bowie said he has pitched in to help with various projects around the city, such as moving an electric transformer.

If council members don’t spend all of his or her oil lease money, it builds up. Though, Johnson and other council members said they try to spend the money on as many useful projects as possible.

“I’m not just throwing the money around,” Johnson said. “I try to be careful with spending, but honestly, I could use $5 million for different projects in my ward.”

One potential project for each council member is replacing or purchasing new street signs for their ward. At Thursday’s work session, Selma Mayor George Evans presented missing or damaged street signs in each ward.

Some wards had an estimated cost greater than others. For example, replacing street signs in Johnson’s ward — the largest in Selma — would cost about $5,000. Bjelke’s was only a few hundred dollars.

To fund emergency or unexpected projects, Bowie previously proposed setting aside money each year from oil lease funds. He later pulled his proposal but remains in favor of setting aside a stream of money for projects like collapsed sewer lines.

“I would hope that in the future we can look at other means to better serve the city as a whole,” Bowie said. “I understand individual council members have to have oil lease funds, but hopefully we can put it in one pool.”

A swimming instructor helps a student during a swim lesson at the YMCA of Selma-Dallas County earlier this year. In... read more