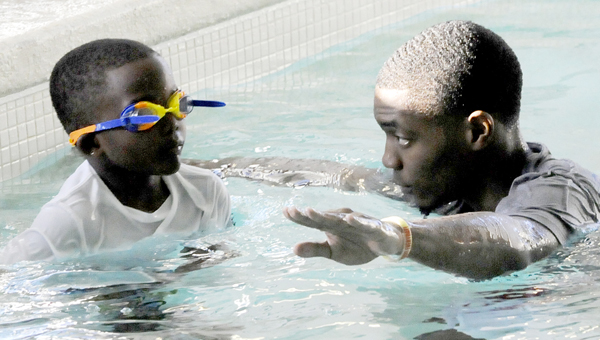 A swimming instructor helps a student during a swim lesson at the YMCA of Selma-Dallas County earlier this year. In an effort to cut the national drowning rate by 50 percent, the American Red Cross launched a campaign to improve water safety education.

To celebrate its 100 years of swimming safety education, the American Red Cross launched a new national campaign Thursday to reduce the national drowning rate by 50 percent over the next three to five years.

The Red Cross said in a press release that 54 percent of Americans cannot swim or do not have basic swimming skills and that every day an average of 10 people die in the United States from unintentional drowning.

“As we all gear up for trips to the pool, beach, rivers and lakes, we’re asking that adults here in Alabama make water safety a priority this summer,” Mark Beddingfield, Chief Executive Officer of the Alabama Red Cross, said. “Families need to make sure that both adults and children have the knowledge and skills they need to be safe in and around the water.”

The Red Cross says of the keys to being safe in the water is learning the five basic skills that can save a life.

The five critical water safety skills are the ability to step or jump into water over one’s head, return to the surface and float for one minute, turn around in a full circle and find an exit, swim 25 yards to the exit and exit from the water.

One of the ways to learn those five key safety skills or to fine tune them is through swimming lessons, said Selma-Dallas County YMCA aquatics administrator Trebor Dukes.

“I always talk to people about how fun [swim lessons are],” Dukes said. “Then I lead up to how dangerous it is if you are ever around a body of water and happen to slip in or get pushed in and how beneficial taking swimming lessons can be in preventing you from panicking.”

Dukes said panicking — often a person’s first instinct when a dangerous situation occurs — is the worst thing someone can do while in the water. Dukes said during swim lessons at the YMCA, he talks to students about what they should do if they suddenly find themselves overwhelmed in the water.

“The first thing I do is tell them to relax,” Dukes said. “I tell them use a circular motion to go in the direction they want to go in, almost like using the breaststroke. Most of the time their feet will be under them but they can at least use their arms to build up their momentum to get to safer ground.”

Swim lessons are just part of water safety Cory Horton, a certified Red Cross lifeguard instructor and pastor at Elkdale Baptist Church, said. Horton said parents can make sure their children are safe this summer just by paying extra attention to the facility around them and those managing it.

“I’m looking for a facility that has clearly posted rules, that they take serious safety,” Horton said. “I’m looking for a facility that takes care of their equipment and that I don’t see rusty diving boards because that is a sign of quality. I’m also looking to see if lifeguards are competent and in their place and that they are paying attention to their job and are very comfortable friendly.”

By Scottie Brown The Selma Times-Journal   The Edmundite Missions in Selma has served the community for more than eight... read more