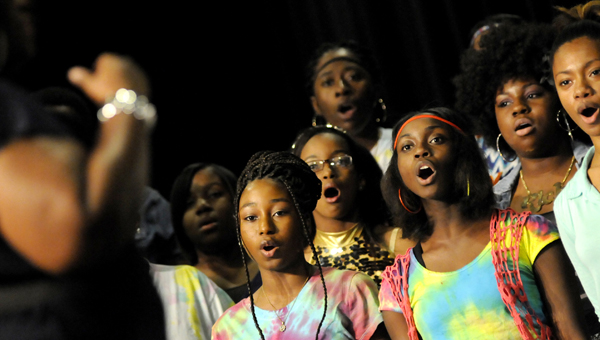 Selma high students sing during the school’s choir performance on Monday. The performance included a section titled “The Magic of Motown.” (By Josh Bergeron | Times-Journal)

The Selma High School Choir sang out their school year Monday, with a fun-filled and beautiful concert before hundreds at the school’s auditorium.

The choir started with an a cappella rendition of “Non Nobis Domine” and glided their audience into the sounds of Motown with Stevie Wonder’s hit “Signed, Sealed, Delivered.”

With a sweet, soulful voice, Nivory Gordon III lulled the crowd into a daze as he performed three solos, each from the different selections of music. Gordon is four-year member of the choir and also this year’s president.

“This was a moment that we choose to grow on the musical side of it,” Gordon said. “It’s something that we’ve all had a part of our lives. It trained us vocally and helped us mentally and physically throughout school. If you have bad days, it’s an uplifter. It just brought you back to life.”

Kairy Crum, a junior and a two-year member of the choir, blew the crowd away with her booming voice during her rendition of Aretha Franklin’s “Ain’t No Way.” Crum, who plans to stick with the choir for her senior year, gained more than just the ability to showcase her powerful voice in this year’s performance.

“I have learned every time you step on stage to always do your best,” Crum said. “No matter who is watching, don’t be nervous. You can do what you want to do and just have fun with it.”

Although the show had a few technical difficulties, choir director Latresha Woods felt the show was a hit.

“Considering I only see these children two days a week, I think it was awesome,” Woods said. “And they sacrificed their Saturday for a dress rehearsal.”

While the admission for the concert was $10, the money will be put to good use. This year the choir will use the money raised from the concert to help fund their trip to Atlanta and Chattanooga, Tenn.

Doris King and Margaret Gamble point toward the audience during their dance. — Photos by Jay Sowers The dancers from... read more