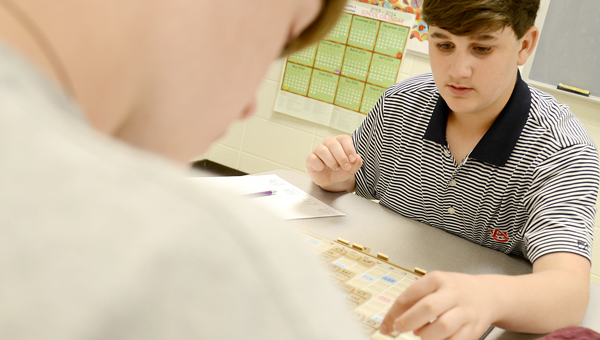 Jackson Jones and Mason Tatum have been friends and Scrabble partners since the third grade, and earlier this spring they were victorious in the Ann West-Davis Memorial Gifted Education State Scrabble Tournament at Alabama Southern Community College in Monroeville. The pair also won the tournament when they were in the sixth grade.

“We teach them that speed is points, just like time is money, and I remember in their very first tournament they were complaining their opponents weren’t playing fast enough,” Dismukes said. “That is when I knew they were going to be good.”

Jones said the key to his success is practice.

“I play with my mom sometimes and I do pretty well,” Jones said. “Sometimes I will read the dictionary or look over this list we have of all the short two- or three-letter words.”

Tatum said his success on the Scrabble board has actually made it a little difficult for him to find someone to practice against when Jackson can’t play.

Wood said the boys have learned far more than spelling while partnering together during tournaments over the years.

“They are building vocabulary, and there is math involved with keeping scoring, along with strategy and problem solving,” Wood said. “And there is the social aspect of working with a teammate and their opponents.”

Wood said the strong friendship between the two, along with their ever-expanding vocabulary, helped them to have an impressive showing at the Ann West-Davis tournament.

Jones will be attending Morgan Academy next year while Tatum plans to attend Dallas County High School, but Jones’ mother doesn’t think that will mean they’ll be spending any less time together at the Scrabble board.

“They love this game too much to stop,” said Greta Jones. “And these boys are too good of friends. I know we’ve got a board at home, and I figure they’ll be play together for a long time.”

Selma high students sing during the school’s choir performance on Monday. The performance included a section titled “The Magic of... read more