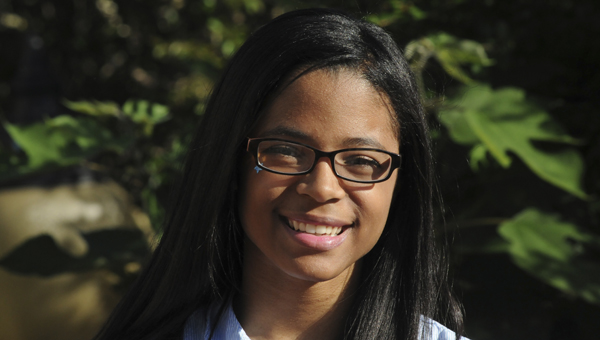 Eleventh grade student Selma High School student Justice Richardson is accepting donations for the to travel overseas for the Birmingham to Beijing Project. The project gives high school students the chance to to take their learning experience to a global level. (By Sarah Robinson | Times-Journal)

With a little financial support, Selma High student Justice Richardson can travel to Beijing and gain a hands-on experience with the Chinese culture that has fascinated her since elementary school.

Richardson has earned the opportunity to participate in the Birmingham to Beijing Project, which allows high school students from low-income communities to travel to Beijing, China to participate in a cultural immersion and Mandarin language program called Youth Leaders of America and China.

Richardson, who is accepting donations to fund her three-week summer trip, said Friday that she currently has received $200 toward her goal of $2,500.

“It’s something that has caught my attention and has held my attention for a long time,” Richardson said. “I’m interested to learn about how the culture is from another view point.”

As a part of the program, students will live on a Confucius Institute campus for three weeks to learn how to be global leaders. They will also gain exposure to people from around the world by building relationships.

Richardson developed an interest in various Asian cultures over the years, including Chinese, Japanese and Korean. Richardson said she couldn’t quite describe what attracts her to Korean Pop, anime and other parts of Asian culture.

“It’s just something that’s in me,” Richardson said.

Like any mother, Richardson’s mother, Niko Phillips, has some reservations about her daughter traveling overseas, but she’s completely supportive.

“I just wouldn’t want her to miss the exposure,” Phillips said. “I think that’s so much more important”

Anyone interested in donating can visit Rally.org or mail donations to P.O. Box 1021 until June 5. For more information, contact Phillips at bamatobeijing@yahoo.com.