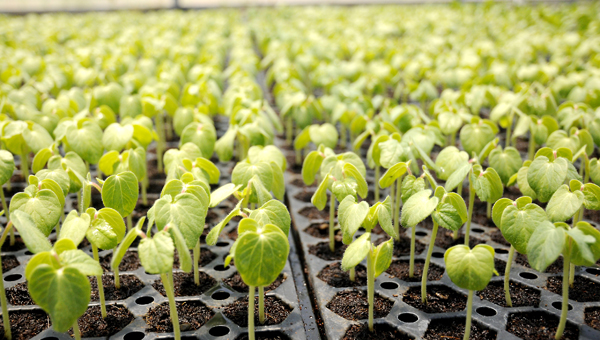 Organic okra plants grow inside of a greenhouse at Wright’s Nursery in Plantersville. The nursery has helped with an organic push in the Black Belt by selling its seedlings to new farmers. (Josh Bergeron | Times-Journal)

An organic farming movement is beginning to gain traction in the Black Belt, with a former candidate for U.S. Congress leading the charge.

Five months ago, Selma native Don Chamberlain helped set up an organic, greenhouse farm south of Moundville. The farm has begun harvesting its first produce, but now Chamberlain is leading the charge for expansion to other parts of the Black Belt one acre at a time.

“There is a growing awareness that people want to eat healthier products,” Chamberlain said. “A lot of folks are going after automobile manufacturers. We went back to the basics and asked, ‘ what do we have in abundance in the Black Belt?’”

The answer is abundant water and fertile soil, Chamberlain said.

After developing the idea, he set up Southern Fresh Produce, which is one of nearly a dozen companies involved in setting up organic farms.

Each plays a different role in the process, but the end goal is to create 11,000 farms across the South that raise organic vegetables.

Chamberlain and the consortium of companies all help provide different services throughout the process. For example, Grundfos — a company with offices across the country and a service center in Selma — helps provide pumps for the greenhouses. Harnois Greenhouses — based in Canada — provides greenhouses.

“We want to provide a turn-key solution,” Chamberlain said. “All they have to furnish the capital.”

He estimated that perspective farmers would need approximately $120,000 to finish the set up process. Chamberlain’s coalition then works to ship the picked produce into nearby grocery stores. He plans for the organic farms to grow in winter, when demand is high, but supply is low.

A Plantersville business has also gotten involved in the process.

Sitting just off of Alabama Highway 22 is an organically certified greenhouse with rows of various plants inside. The greenhouse is part of Wright’s Nursery.

David Wright’s nursery has provided seedlings to the Chamberlain’s original organic farm. Some of the seedlings include: cucumbers, tomatoes and okra.

The only difference between organic and traditionally grown crops is the use of pesticides, Wright said. He said using even a drop of pesticides on a plant means its not technically organic.

Instead of pesticides, Wright said farms use specially made types of soaps to prevent insect infestations.

“With a conventional crop there is an easy, quick fix to problems,” he said. “There is no quick fix for problems with organic vegetables.”

Wright said a future expansion of Chamberlain’s organic effort could provide a boost to business for Wright’s Nursery.

Though Chamberlain says he is focuses on providing a healthier product to consumers, another goal is to create jobs in the Black Belt.

“For 50 years, we have been promised by every politician that ever breathed that they were going to do something about [low income levels],” Chamberlain said.

No organic farm, associated with Chamberlain’s effort, currently exists in Dallas County, but he plans to set up a staging point for shipping vegetables near the Selma Farmers Market.

Boyfriend charged in the murder of his girlfriend

By Christopher Edmunds The Selma Times-Journal   Eric King Jr., 21, was arrested Sunday and charged with murder for allegedly... read more