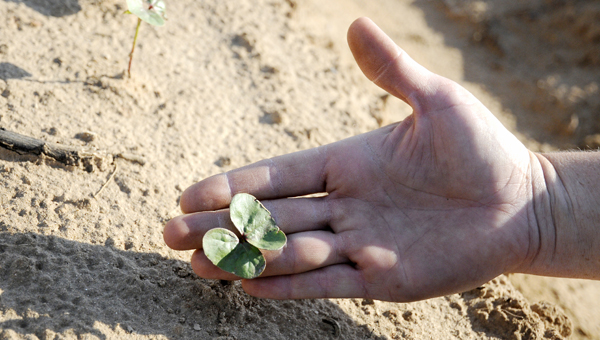 Fields of row crops across Dallas County are beginning to take shape with farmers in the midst of the spring planting season.

A crop progress report from the U.S. Department of Agriculture, released Monday, stated 97 percent of corn, 47 percent of cotton 31 percent of peanuts and 40 percent of soybeans have been planted.

“Cotton and peanuts are a little behind — probably a week to two weeks behind normal,” Geesey said. “The later you get the crops in the ground, the greater chance of production being hurt.”

A Dallas County farming couple — Jamie and Wendy Yeager — seem to be ahead of the planting curve for cotton.

Wendy said they wrapped up cotton planting May 13 and are beginning to move on to other crops. The couple’s other crops include wheat, soybeans and peanuts.

“We are about average for where we would like to be at,” Jamie said. “We weren’t able to get some of our field work done as early as I would have liked, but it hasn’t slowed us down too bad.”

Jamie said the couple has about 200 total acres left to plant. Jamie said the acreage isn’t concerning when compared to the total size of their farm land, but, as always, timeliness is important in ensuring a successful season.

“We are really only given so many days to get things done,” he said. “The biggest thing that can cause problems is breakdowns in equipment.”

Wendy joked about eating lunch while doing fieldwork as an example of sticking to a strict schedule.

“I was literally eating lunch on a tractor in a forward motion,” she said. “Timing is of the essence.”

Last year the couple was among dozens of Alabama farmers that reported bountiful crop yields because of timely rainfall.

“Two years ago we set records in all the major crops except for corn,” he said. “Last year, with the rains we had, corn had a record year. Other crops fell off a bit, but were still strong.

In 2014, Wendy said she is hoping for more of the same on the couple’s land, which has doubled in size since 2013.

“I’m always an optimist,” she said. “We don’t really stress about it, but when you know the time is right you want to get rolling right away.”