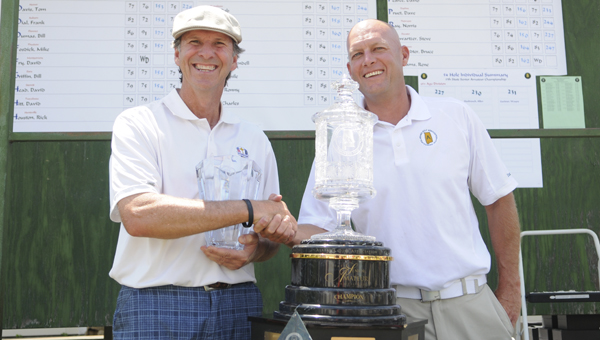 Birmingham’s Steve Hudson, left, is presented with the State Senior Amateur Championship trophy by the Alabama Golf Association’s Brian Scheufler. Hudson shot a 67 on Sunday, the lowest round of the tournament, to win the overall championship by eight shots over Fairhope’s Robert Nelson.–Daniel Evans

An eagle at the first hole gave Steve Hudson a little breathing room and four other birdies allowed him to lap the field Sunday at the State Senior Amateur Championship at the Selma Country Club.

Hudson, from Birmingham, shot 67 — the low round of the tournament — to finish with a total of 208 for an eight-shot victory over Fairhope’s Robert Nelson.

After Hudson eagled the first to widen his advantage to two shots, those chasing him probably knew it was going to be hard to catch him.

“One of my strategies is to try to make a birdie every three holes knowing that some bogeys are going to slip in there,” Hudson said. “The eagle helped me get a jumpstart on that.”

The other players in the final group, Nelson and Birmingham’s Mike Greer also got off to a quick start. Greer chipped in on the first for an eagle, while Nelson made birdie.

The turning point of the tournament might have been the par-3, fourth. After Greer and Nelson had bogeyed, Hudson knocked in a birdie putt to extend his lead to six shots.

“I birdied the fourth hole, which is that tough par-3,” Hudson said. “That’s a harder birdie than No. 1 may be an eagle. I hit a hybrid 4-iron into that hole and then made the putt.”

Nelson fought his way back into contention by making birdies at five and six. When Hudson bogeyed the tenth hole, his lead was down to four shots, but Nelson couldn’t take advantage as he bogeyed three of the final seven holes to take any drama out of the back nine.

“I hit a debacle on three and four that cost me three shots but even if I had pared those, he still played so good even fixing some of my mistakes wouldn’t have caught him,” Nelson said. “It was a well deserved win by Steve.”

Hudson is no stranger to Alabama Golf Association championships. He also won the 2011 State Senior Championship at Saugahatchee Country Club and the 2010 and 2012 State Mid-Amateurs titles, but this one was a little extra special.

“Selma has always been a special place,” Hudson said. “I used to come here and play in the 10-and-under Dixie Junior and my dad was friends with Mr. and Mrs. Bud Burns and I would stay at their house … There’s a lot of fun memories here. “

The 57-64 age division was won by Pike Road’s Emile Vaughan, who won the 2013 overall Senior State Championship. Vaughan shot a 1-under 70 on Sunday to win by eight shots over four players.

Decatur’s Steve Schwartzer won the 65-and-older age group with a final round 77, giving him a three-shot win over Huntsville’s Allan Hasbrouck.

Selma’s Moses Ngirailab hits a pitch shot onto the 18th green during the second round of the Alabama Golf Association’s... read more