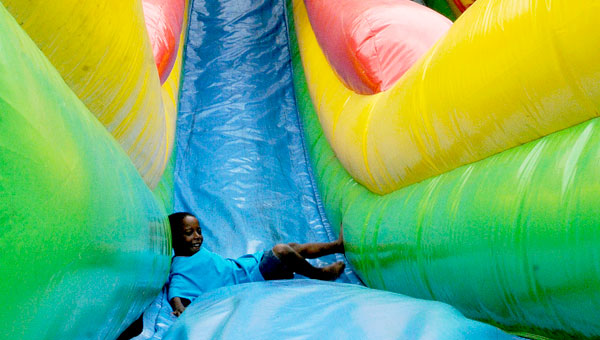 Roderickus Johnson, a student from Meadowview Elementary, has some fun going down the inflatables Friday, just one of the many things students had to do at Yeargan Farms. (Scottie Brown | Times-Journal)

It might have seemed like just fun and games to outsiders looking in, but after Meadowview Elementary’s field day Friday at Yeargan Farms, the students took home much more.

This is the first year that Meadowview hosted its field day at Yeargan Farms.

“We do the field day every year at the end of the year just to celebrate the school year ending and testing being over and it is just a good fun day to end the year,” said Amanda Holbrook, a kindergarten teacher at Meadowview.

“It gives them time to work as groups, and to compete against each other,” Woods said. “Sometimes, it’s a teamwork thing. Sometimes, they get to do things they’ve never gotten to do before. Like the sack races, they don’t get to do sack races. It’s a new experience.”

But while the kids were also having fun, they were still learning a great deal.

“They really enjoy this, and it’s a different environment than just the classroom,” Holbrook said.

Angie Yeargan, one of the owners of Yeargan Farms, said the farm had to do some preparing for the kids before they got there.

“We had to go through and plan different games they can play, and prepare the schedule,” Yeargan said. “This is a whole elementary school, so we scheduled out each class so no one is on top of each other and everybody can enjoy their day.”

Yeargan said she believed the children would really benefit from the being out at the farm.

“They get a break,” Yeargan said. “They love not being at school. It’s a different atmosphere. Instead of just having their May Day on the playground, they can come out here to a farm.”

By Scottie Brown The Selma-Times Journal   The third annual Unity in the Community Praise and Worship with an International... read more