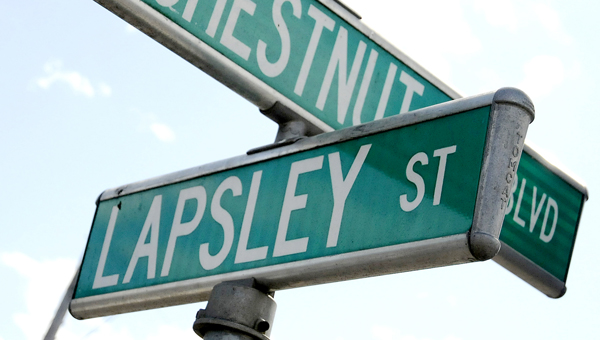 The Selma City Council will have a public hearing for a renaming of Lapsley Street on Saturday. One proposal would start the renamed street at the corner of Lapsley Street and J.L. Chestnut Boulevard. — Josh Bergeron

The future of Lapsley Street could be decided Saturday.

The Selma City Council will hold a public hearing at 10 a.m. at city hall on the street’s renaming in honor of civil rights activist Amelia Boynton.

Ward 3 Councilman Greg Bjelke said he wants to leave the meeting with a firm understanding of how citizens would like to honor Boynton.

“I have received some good ideas, not only to honor Mrs. Boynton, but all civil rights icons in Selma,” Bjelke said. “I want to hear positive comments about what residents in the area want to see.”

Bowie said input from the public hearing would be considered in the council’s administrative committee before a decision is made.

The debate over Lapsley Street’s renaming began several years ago, but Ward 7 Councilwoman Bennie Ruth Crenshaw reignited conversation in late March, when she proposed renaming Lapsley Street in its entirety for Boynton. The street runs from the Alabama River to R.B. Hudson Middle School. It becomes Summerfield Road at R.B. Hudson.

Shortly after Crenshaw’s proposal, council members unanimously expressed support in favor of honoring Boynton, but were hesitant about renaming the street entirely.

Amelia Boynton is one of many in her family that were involved in the civil rights movement.

Her son Bruce Boynton started the Freedom Riders in the 1960s after he was charged and convicted of trespassing for being in a restaurant in a bus terminal, which was “whites only.”

Lapsley Street is named after a family in Selma that included a railroad entrepreneur and prominent attorney.