With most of roster back, DCHS enjoying ‘easy’ spring 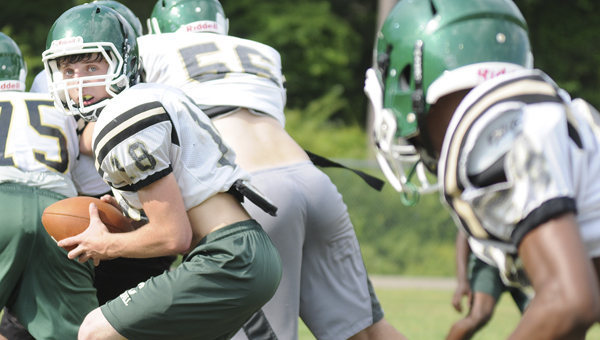 Dallas County quarterback Hunter Myers turns and prepares to hand the ball off during Tuesday’s practice at Dallas County High School. The Hornets will play their spring game Friday night at Marbury High School at 6 p.m. Dallas County will face Marbury and Elmore County in the jamboree contest.–Daniel Evans

In his first season at the helm, Dallas County head football coach Barry Colburn dealt with an inexperienced team that struggled to a 2-8 season. But youth may no longer be an issue for the Hornets.

This upcoming season Dallas County will still be  young, but based on the number of familiar faces at spring practices, the Hornets will no longer be inexperienced. Colburn estimates 50 of the 56 players out for spring practices played last season, which has helped the Hornets jump right into the playbook this spring.

“We have a little continuity because most of these players have been with us for a year, so they understand the terminology already and they understand the formations we run and all that stuff,” Colburn said. “We are really taking everything we did last year and polishing it up.”

The Hornets’ schedule has received a face lift as well, because Dallas County moved from Class 4A to 5A under the Alabama High School Athletic Association’s realignment for the 2014-2016 school years.

Colburn said he isn’t worried about the new classification level, although he makes sure to remind his team of it every practice.

“There’s nothing to be afraid of,” Colburn said. “We are basically just changing the names [of our opponents].”

Colburn said it cannot get much harder than what his team faced last season in Class 4A, Region 3, where four teams spent time ranked in the state’s top 10.

“When you get into what we played last year, Demopolis is good but so is Clay Central,” Colburn said. “There really isn’t that much of a change as far as that is concerned because the skill level is pretty high. We have to be concerned about us.”

Colburn is more concerned about changing the culture at Dallas County and helping his team learn to win. The last time the Hornets won more games than they lost was 2003, when Dallas County went 7-4. He said he would like to see the stands full at home games this season, because it would help the Hornets push through what promises to be a challenging schedule.

Among those is quarterback Hunter Myers, an upcoming sophomore that Colburn has anointed the starting quarterback for the Hornets.

Myers and the rest of the Dallas County team will get its first test Friday night at Marbury High School in the team’s jamboree game.

The Hornets will face Marbury and Elmore County in contents that will last two quarters each. The game will start at 6 p.m.