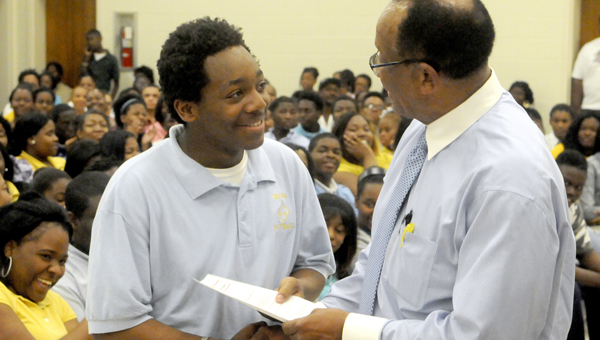 Selma Mayor George Evans, right, presents the paperwork to a student last May who was selected for one of the city summer jobs that is part of the annual Summer Youth Empoyment program in Selma. The lottery for this summer’s employment will be held Wednesday evening at the Carl C. Morgan Convention Center. — File Photo

More than 400 area youth will find out Wednesday if they will have a summer job as the annual lottery is held for Selma’s Summer Youth Employment Program.

The lottery will begin at 6 p.m. Wednesday at the Carl C. Morgan Convention Center in Selma, and Selma Personnel Director Val Jones said the city would be able to temporarily employ 180 of the 439 people who applied for positions.

“This program is made possible because of money allotted by council, as well as funds from sponsors,” Jones said.

“We are expecting, and hoping for, more funds to come in until the end of the program. If we can provide kids with one or two more days of work, that is fine.”

The Selma City Council included $75,000 in the city’s annual budget for the program.

Jones said the young workers who are given one of the available positions within a number of departments at the city would work 16-hours-a-week for four weeks and be paid $7.25 an hour, which is minimum wage.

“The first of two shifts will last from June 3 through June 30, and the second shift will be from July 7 to July 31,” Jones said. “And unfortunately, we can’t hire as many people as we would wish. You always want to hire more people.”

Last year, the program was able to temporarily employ 184 workers.

The younger sister of Jones’ co-worker, Tanya McElroy, got her first job when she was 15 through the program, and McElroy said she had learned a lot from the opportunity.

“I remember she was very excited. It was her first job and it actually made her want to work more and more,” McElroy said. “Right after that she would work at Walmart after she got out of school everyday. It gave her some responsibilities and taught her the value of hard work.

Applications for the lottery had to be turned in no later than Friday, May 2. All must be present and on time for Wednesday’s lottery if their name is called.

For more information, contact the city’s personnel department at 874-2110.