Editor’s note: This is the first in a series of featuring the valedictorians from each of the high schools and private schools in Dallas County.

Morgan Academy senior Charlie Ammons can now add valedictorian to his list of achievements, as he has been named the top student for the school’s Class of 2014. 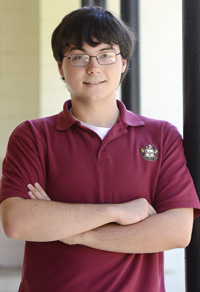 Ammons has a grade point average of 4.15 and had the highest academic average since seventh grade.

“I’m excited,” Ammons said shortly after the Morgan’s Awards Day ceremony held Thursday. “It’s an honor, because I know everyone in the class worked hard, too.”

As a student who enjoys giving back to the community, Ammons was involved in various school organizations throughout high school career such as the math team, scholar bowl team and the Drama Club.

“I just like to keep to my time occupied and be around people who are interested in the same things,” Ammons said.

Ammons has been accepted in to Auburn University, where he plans to pursue a degree in chemical engineering with the financial support of a full-ride scholarship from the university.

“We are so proud of this young man,” Schroeder said. “He has worked so hard.”

Schroeder said Morgan Academy is confident Ammons will continue to be successful.

“We expect to see many great things from him,” Schroeder said.

The American Dream is built on the principles of hard work and ingenuity. In today’s economy, though, these virtues are... read more