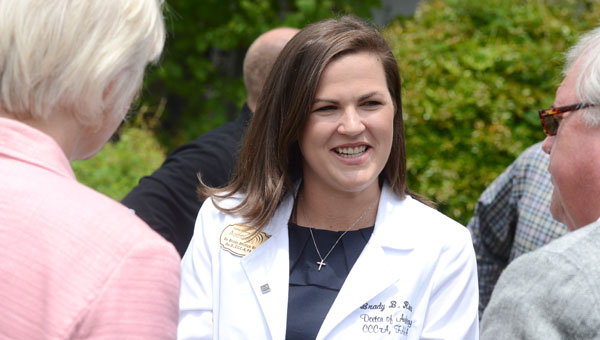 After graduating from Morgan Academy in 2005 and beginning her studies at Auburn University, Dr. Brady Bostick Rives, had two goals: return to Selma and open her own private audiology practice.

Rives hosted a ribbon cutting Monday with members of the Selma and Dallas County communities to officially welcome her business, Central Alabama Audiology.

After graduating from Auburn and completing graduate studies at the University of South Alabama, Rives worked for 2 1/2 years at a practice in Montgomery.

Rives said she is glad to return to Selma, where she knows there is a need for a full-time audiologist.

“Just seeing the number of patients who would drive to see me in Montgomery, there is a great need for this here,” Rives said. “It’s just a newer profession, and people are just starting to understand what audiologists do.”

Rives said her new practice would perform hearing screenings for adults and children, as well as prepare and repair hearing aids for patients.

Rives’ mother, Pam Bostick, attended Monday’s ceremony, as said she was as thrilled for her daughter as she was for the community she would be serving.

“I’m excited for her as a daughter, and immensely proud. But, I’m excited as a born and raised Selmian, this means a lot to me and my friends in the community because she has decided to come back and invest in central Alabama,” Bostick said. “There is quite a shortage of audiologists nationally, so she could have gone anywhere, but she chose to come here to live and raise her family.”

The work of starting her practice is just beginning, but Rives said the realization of two of her dreams has not been lost on her.

“It starting to sink in because of today’s event and actually seeing my name on the sign, which is weird but awesome,” Rives said. “The dream is finally coming true.”

Central Alabama Audiology is located at 4 Office Park Circle in Selma, and can be reached at 872-9711.