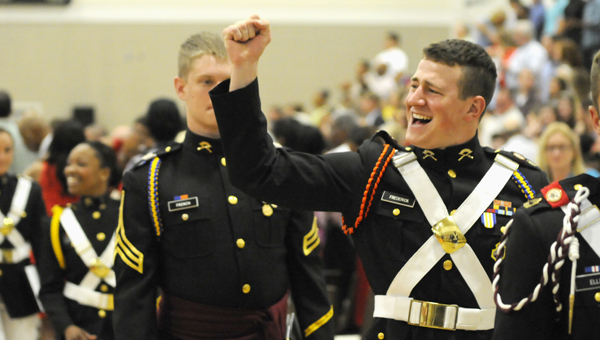 By Josh Bergeron and Daniel Evans

Marion Military Institute and Concordia College Alabama celebrated their 2014 commencement ceremonies Saturday with speeches from a state legislator and a man of God.

A total of 83 students graduated from Marion Military Institute on Saturday.

Mollahan reminded the graduates that a degree from the military academy is an extraordinary achievement.

“You will have this for the rest of your lives, it will be respected wherever you go and in whatever you do,” he said. “As you continue on your path to the future, we hope you that remember the home you had here in Marion — your very own sweet home Alabama.”

Mollahan then welcomed Hubbard up to the podium. Hubbard began by complimenting students and faculty and continuing by addressing the difficult job market some students may face.

“Credit is tight and the banks aren’t lending as they used to,” he said.

But Hubbard also encouraged graduates to dream, as residents of the land of opportunity.

“You’re part of generation that is rewriting the very definition of technology and social interaction,” he said. “Most importantly, you live in the United State of America and where your opportunities are limited only by your capacity to dream.”

Before the students were awarded their degrees, Nunes wanted to make sure they understand how many doors a degree from CCA would open for them in the future.

“I ask you, do you realize that you have available to you more opportunity than most of this world has?” Nunes asked. “Just because you live here in the United States and because you hold a degree from Concordia College Selma Alabama.”

After the graduates flipped their tassels, the college handed out service awards to faculty members Ruthie Jackson-Orsborn and Joe Owens to thank them for their decades of service.