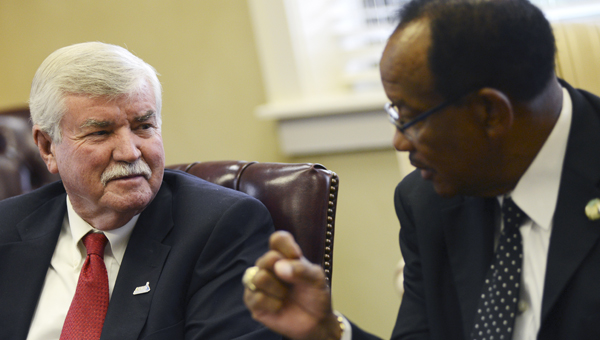 An engineering company, with offices in Huntsville, has selected Craig Field as its preferred site in a bid for international pilot training.

Vardaman said the pilot training isn’t coming to Selma just yet. Science and Engineering Services is one of several companies vying to secure a contract with Kuwait’s military for its pilot training.

If successful, Vardaman said the deal would revitalize a once bustling Air Force Base.

The company is expected to submit its bid for Kuwait’s pilot training program at the end of May. If successful, the bid would be awarded in September, Vardaman said.

He said the training would be tied to a five-year contract, with an option to renew at the end.

The international pilot training program would provide flight screening and support services for up to 300 students annually, according to a news release. Approximately 75 to 100 training personnel and dozens of support staff would be hired as a part of the deal, according to Vardaman. A successful bid could also mean an overhaul for dozens of buildings on Craig Field, he said.

“I think we just have a gold mine out there at Craig Field,” Evans said. “It would be retapping that and certainly it’s going to change the quality of life for a lot of people in Selma and Dallas County.”

If successful, the training would initially begin with 30 students and slowly increase until reaching 300. Vardaman said the pilot training would take 14 to 16 months per class.

Craig Field director Menzo Driskell also talked about the potential a successful bid would offer to the Selma area.

“It’s probably the best opportunity that we have had in the years I have been here,” Driskell said. “It’s a quality company that is full of organized individuals.”

Vardaman said he is cautiously optimistic that Science and Engineering Services’ bid will be successful. The company secures about 90 percent of projects it bids for, according to Vardaman.

Securing Science and Engineering Services’ commitment began nearly four months ago, according to Vardaman. He said the company initially contacted economic development with the idea.

“They looked at a lot of places in the state so we had competition,” he said. “The thing that attracted them is the campus atmosphere, everything is in one location.”

The contact between the City of Selma and Strand Management, the company selected by the city to run the iconic... read more