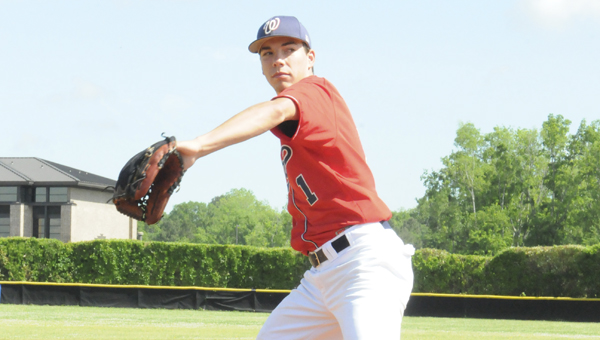 Like the velocity on his fastball, word about Wallace Community College Selma pitcher Kevin Simmons has increased rapidly this spring.

Between the fall and spring, Simmons picked up speed on his pitches and started throwing in the mid 90’s. It didn’t take long for major league scouts to find out, especially with Simmons blazing through the National Junior College Athletic Association.

“I gained four or five mph from somewhere. I don’t even know where it came from,” Simmons said. “All of a sudden, people started coming to the games. We had one scout at one game and then all of a sudden at the next game there was 17.”

Simmons isn’t sure where the extra velocity came from, but somewhere between fall ball and the spring, his fastball developed extra movement — which in turn excited major league clubs that had not shown any interest up to that point.

Although Simmons isn’t sure what changed, his coach has a hunch where it came from.

“His work ethic is unbelievable,” WCCS head baseball coach Frank Elliott said. “I tell all these scouts that when he gets out of the car he’s hustling. He hustles the entire practice until he gets back in the car and starts the ignition and leaves.”

Simmons admits he had some butterflies when all of the attention started from scouts, but it didn’t take long for him to realize that all of this could be the beginning of his childhood dreams coming true.

“I felt nervous the first time and after 17 showed up after that one time I was kind of relieved that they actually came,” Simmons said. “I felt like things were actually falling in place.”

Like many young boys, Simmons grew up with hopes of playing major league baseball. Now, Simmons — a local product that graduated from Dallas County High School — may be only a few weeks away from realizing that dream.

The Major League Baseball draft will run from June 5-7 and at this point there’s growing optimism that Simmons will be one of the hundreds of players picked.

“We are planning on having family come over to the house and waiting to see what happens,” Simmons said.

If he doesn’t get drafted, Simmons already has a plan in place.

He signed with West Alabama in the fall and has not wavered from his commitment to play for the Tigers despite other programs offering this spring.

If his name does get called in a couple of weeks, Simmons plans to join the major league team that drafts him. One thing is for sure, there’s a lot of people hoping he’s playing for a major league organization in the upcoming months.

“This is the type of kid you’re rooting for,” Elliott said.