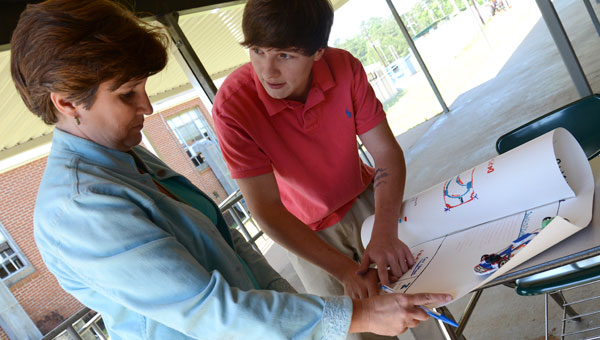 It is an accepted fact that the minds of high school students will wander from the lesson plan, especially after spring break, but it isn’t often when they are trying to figure out how to run a car on hydroelectric power.

On a spring break trip to the Gulf Coast, Dallas County High School sophomore Kaleb Cooke was struck by the high price of gas and he wanted to do something about it.

“I decided there had to be a better, cheaper way to do it,” Cooke said. “I thought that if you could use the power of water like we already do in a dam, it could be a cheaper way to power the car.”

With that idea in mind, Cooke went to work in his spare time to come up with a way to power a car with nothing but water and electricity.

Cooke’s concept involves having water pumped through turbines in a car to create electricity, which would be sent to four separate batteries located near each of the vehicle’s tires. Each battery would power four different engines that would be used to spin a magnet positioned next to an opposing magnet on the wheels.

Cooke said he is considering several options to collect power to start the pumps in the car.

“It has to have a main start up point that will either be a solar panel or backup battery that will power that pump to start the car,” Cooke said.

As Cooke — who one day hopes to study engineering at Auburn University — has presented his idea to teachers and administrators at DCHS, they’ve all expressed a desire to help him make this concept a reality.

“I think it’s feasible idea, engineering wise. He’s doing the details step by step that you do in engineering and design,” Glenn Walker, advanced mathematics teacher at DCHS, said. “You maybe have one student a year who comes up with an idea like this and really pursues it.”

Geometry teacher Shelby Fancher said seeing a student use her lessons on something like Cooke’s concept is the best part of her job.

Cooke is one step ahead of Fancher, it seems, as he received a packet in the mail Monday from the U.S. Patent and Trademark Office.

Kaleb applied for the patent with help from his mother Cynthia.

“He’s pretty outgoing to try and do things like that,” Cynthia said. “This is totally him, too. I’m not creative like that at all.”

Echoing Fancher’s sentiments, Dallas County High School principal Michael Blair said it is always a highlight to see a student so excited about an idea of their own.

“I love it,” Blair said. “Anytime a kid comes up with a concept like this, you really want to listen to them because he loves what he’s doing. His concept is a good concept, and it’s just about what comes next.”

Special Olympians have their day at Memorial Stadium

Nine-year-old Suprener Acorn is hoisted into the air by family members during the Special Olympics event at Selma’s Memorial Stadium.... read more