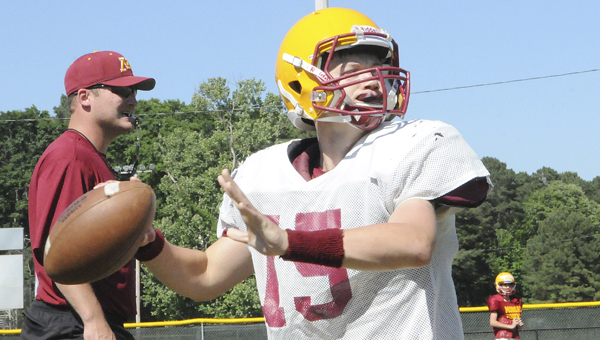 Morgan Academy quarterback Harrison Adams, above, throws the football as head coach Jake Wingo looks on during Tuesday’s practice. Wingo, below, watches a group of offensive lineman step through a drill. –Daniel Evans

Before new Morgan Academy head football coach and athletic director Jake Wingo completely unveils the new offense he’s bringing with him from Sumter Academy, he’s going back to the basics to teach the Senators how to play disciplined football.

Players spent most of the afternoon in positional groups, learning the footwork needed to be successful when they strap on their helmets in the fall.

Wingo, who was only on his second day on the job, walked between groups, dishing out suggestions to players.

His goal this spring is simple: Teach his football team how to be disciplined on and off the field.

“Number one for us is to concentrate on being a disciplined football in all aspects of our life,” Wingo said. “It’s not just on the football field, but how we take care of the things we have — our locker room, the way we treat people, being disciplined in the classroom — and in turn we will be a disciplined team on the field. That’s where we are starting out.”

The Senators will probably need to show a little discipline and patience as they transition into Wingo’s run-heavy offense that will be a complete change of pace for Morgan. Last season, the Senators threw the ball 328 times compared to 287 total rushing attempts.

This upcoming season, those numbers are likely to at least flip with Wingo commited to featuring a wing-T offense that will control the clock and the football.

“I’m a young coach with an old school philosophy,” Wingo said. “It is going to be a lot different. My goal is to have a tough defense and we are going to run the ball on the offense. We are going to control the clock, eliminate turnovers and penalties.”

Despite the big change, the Morgan offense will see this upcoming fall, learning the playbook is not the main focus of the spring.

“We are going to get the basics in as far as our defensive scheme,
Wingo said.

“We will put the core of our defensive philosophy in and on offense the same thing. We will put in a few base plays and try to perfect those. The fall is going to be big time for us, implementing the rest of it.”

Wingo said getting a chance to take a look at players this spring is key.

“It’s huge. I have a great luxury; I get to see it through a clear perspective,” Wingo said. “It’s a big evaluation process. I get to see what every player can do.”

Morgan Academy is not playing in a spring jamboree football game.

Wingo had a 6-15 coaching record during his two years at Sumter Academy. He is taking over a Senators’ program that went 6-14 the last two seasons.

Wingo is replacing Bob Taylor as athletic director and football coach. Taylor has held both positions at Morgan for the last two years.

The players and coaches of the Lowndes Academy Lady Rebels pose for a team photograph, with their state title trophy,... read more