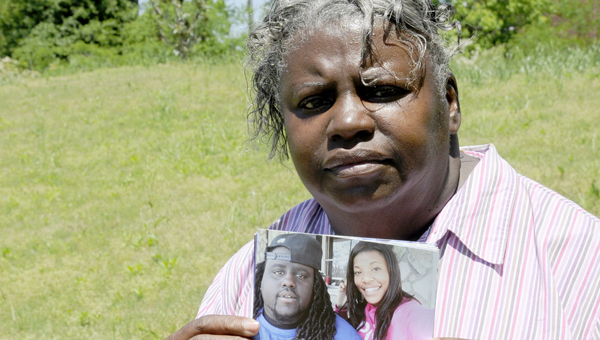 Patricia Robinson holds a photograph that includes her son, Andre Robinson. Andre was shot and killed during a robbery on April 22. No suspects have been identified in the 32-year-old’s murder. — Sarah Robinson

Two weeks have passed since Andre, 32, was shot and killed during a robbery on St. Phillips Street, and she’s still in disbelief. Memories of her son Andre, who she described as a peacemaker, run through her mind nearly every moment of every day.

“I’m never going to see my child walk through my door again. He’s never again going to say, ‘I love you, Ma,’” Patricia said. “I am not going to have that anymore.”

Patricia said her daily routine has become difficult as she bears the pain of the loss of her son.

“It’s like a train behind me, and I’m still trying to do the stuff I did before,” Patricia said, holding back tears. “I’m not the same person anymore, nor do I think I ever will be.”

She now relies on her faith, prayers and the support from others to get her through this time.

Although nothing can bring her son back, she said learning those involved in the shooting and robbery have been found, arrested and convicted would help ease her mind some. To date, the Selma Police Department has not made any arrests in the case.

Until justice comes, Patricia said she will go on wondering if the people around her, living in her neighborhood, or complete strangers she interacts with are the ones that took her son’s life.

Patricia said she has already forgiven those responsible in heart, but she just needs answers to bring closure to that particular hurting aspect of the situation.

“I can’t be as outgoing as a used to be. I can’t hug like I used to do, because I don’t know who did this,” Patricia said. “I don’t know how to feel. I just go from day to day.”

Known as Dre, Big Dre, Cool Dre, or King Dre, as well as other nicknames, Andre was familiar to several in his neighborhood, Patricia said. She described him as a soft-spoken individual with a relaxed demeanor.

Patricia laughed as she recalled the great moments she shared with Andrew hours before he was killed. During that time he was doing what he often does, which is take care of his mother.

She said the two were together making sure her vehicle was operating quickly and the then shared a conversation — and a few laughs — before he departed, but not before saying “love you.”

Patricia said she feels blessed knowing Andre said he loved her every time the two interacted, and it meant even more knowing he said it before the tragic incident had occurred.

“I’m grateful of that day,” Patricia said. “I’m so grateful he was happy that day.”

Patricia said the crowd that attended Andre’s funeral, as well as the numerous calls, visits and prayers her family has received has shown her just how much people throughout the community love the Robinson family.

“He had a lot of people who I didn’t even know; far and near that just loved him,” Patricia said of those who attended Andre’s funeral. “Some people were people who I forgot that I even knew.”

She said the only thing she can do now is hope for those responsible are caught and she is asking for the to help the Selma Police, by providing whatever information they might have.

Students pour out of Byrd Elementary at the end of the school day earlier this year. The Selma City School... read more