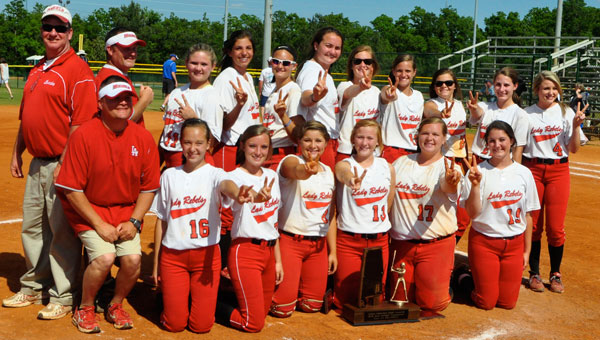 The players and coaches of the Lowndes Academy Lady Rebels pose for a team photograph, with their state title trophy, after winning the AISA Class AA State Softball Championship Saturday in Montgomery. (Fred Guarino |The Lowndes Signal)

The Lady Rebels completed the 2014 season with an 8-7 win and a 13-0 shut out of Wilcox Academy to claim the state championship Saturday at Lagoon Park in Montgomery.

The Lady Rebels went 24-10 on the season overall.

While Lowndes Academy won their area, they were a third seed in the state playoff tournament because of a 3-2 loss against Wilcox Academy in the regional tournament.

“It was special to win it for these seniors.” Lowndes head coach Matt Marshall said. “They’ve been with me — some of them — the pitcher Paige Hill has been a starter since the seventh grade.”

Marshall said the entire 2014 season has been a group effort by his team, especially pulling things together after Mallory McCurdy broke her ankle in the third game of the season.

“I very thankful, and I’m just happy that God was with us,” Hill said. “We showed up and God showed out, and I’m very proud of my team … and most importantly the fans and the families.”

Keith’s Jeremiah Campbell races a competitor from Falkville down the stretch in the boys’ 200-meter dash Friday at Selma’s Memorial... read more