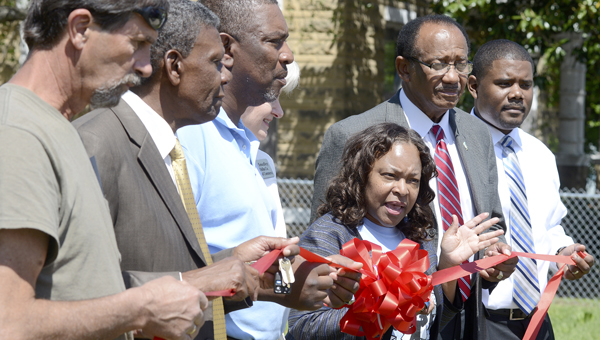 Carolyn Bates, founder and director of the Selma Disabilities Advocacy Program, center, leads the ceremony marking the groundbreaking of a playground designed for children with disabilities.–Jay Sowers

Children with disabilities will soon have a park and playground all their own following a groundbreaking ceremony Friday on the grassy lot next to the Child Advocacy Academic Learning Center building on Lauderdale Street.

Carolyn Bates, founder and director of the Selma Disabilities Advocacy Program, headquartered in the CAALC building, said the park would be designed with the needs of children with disabilities in mind.

“This park is designed so they can be themselves without anybody stigmatizing them,” Bates said. “Most of the time, when you go to a regular park, you’ve got other kids there and they are not trained how to accept children with special needs. This will let the children and their parents truly relax.”

Bates said the children would use the playground’s slides and ladders to not only play, as other children would, but they would also use it to learn valuable lessons.

“Our goal is to make sure the special needs children can get the same recreation and social skill opportunities as others,” Bates said. “Most children go to the park to play, and these children will come here to learn motor skills, social skills and other things they need.”

After hearing Bates talk about the money she hoped to raise for the project and the playground’s value to its future users, State Rep. Darrio Melton was moved to make an early donation.

“How you measure us as leaders and elected officials is not by what we do for ourselves, it’s what we do for the most vulnerable people who live among us,” Melton said while addressing Bates and the crowd gathered. “I see you have a playground you are trying to put up. I just saw this today. So, I’m making the commitment to you publicly that your first $1,000 is coming from me.”

Sharon Streeter, director of special education services with Dallas County Schools, attended Friday’s ceremony and she said a park and playground like the one soon to exist on Lauderdale Street is needed in Selma.

“It is very critical to have something like this because the number of autistic students it is greatly increasing, and so I feel it is so important for us to have an awareness of what autism is, as well as have a park like this to give those autistic children a place to feel safe.”