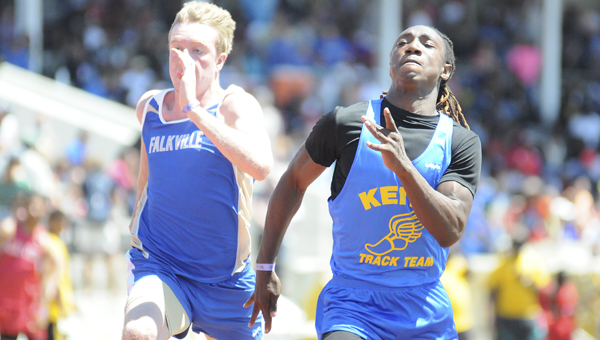 Keith’s Jeremiah Campbell races a competitor from Falkville down the stretch in the boys’ 200-meter dash Friday at Selma’s Memorial Stadium. Campbell finished fourth in the race.–Daniel Evans

Stallworth complimented the city for taking care of issues with the track in the months leading up to the meet and only had positive things to say about Memorial Stadium, which he called one of the oldest track and field facilities used by the AHSAA.

“The weather is perfect, [the athletes] are setting a lot of records and the high school coaches as a unit are basically doing what they are supposed to do… It shows how well it runs when everybody is working together,” Reece said.

One of the reasons this year’s meet went so well was because of the familiarity people have with Selma after three years of track and field meets, Reece said.

“It’s a whole learning process. People coming for two or three straight years learn the system,” Reece said. “The first year they come they don’t know anybody, they don’t how we react, and they don’t know the layout. But the last two years has been good because it’s the same people coming back here year after year.”

The same faces seemed to show up in the winner’s circle over the past three years too.

Piedmont’s boys repeated as Class 3A state champions, beating out Greensboro, who won the 2012 state championship in Selma.  Falkville won the Class 1A boys championship for the second consecutive year and it wasn’t even close. The Blue Devils scored 157 points, the most of any team in all classes this weekend.

T.R. Miller was a new champion, although it hasn’t been long since the Tigers celebration a state title. T.R. Miller won the 2010 and 2011 Class 3A state championship trophies and now has a third championship in five years.

“Our girls have been outstanding this weekend,” T.R. Miller assistant head coach Rod Atkinson said. “Everybody has probably set their personal records this weekend. Karisa Nelson has been on fire, she set three records in the last two days, but the whole team has just been outstanding.”

Setting new records seemed to be a theme for the weekend, as numerous new records were set, but one of the better stories of the weekend may have been a record that actually wasn’t broken.

Bram Miller of Falkville won the boys’ high jump on Friday with a jump of 6-foot-6, but was awarded a new state record of 6-foot-8 erroneously. Miller pointed out the scoring mistake Saturday morning and the AHSAA fixed the scoring error, putting the Falkville sophomore back at his correct score.

“He told me last night, and we talked about it and I promised him we would get it corrected today,” Falkville track coach Keith Wilemon said in a AHSAA press release. “He made it clear he did not want to be given credit for something he did not do.”

The change in Miller’s score did not affect Falkville’s total score.

Keith High School was the only local school that participated in Saturday’s events. The Bears’ already had a medal to their credit after Anfernee Simmons had finished third in the boys’ high jump Friday.

Keith added a silver medal after finishing just behind Marion County in the boys’ 4×100 relay Saturday.

“They were just faster than us today so I can’t complain,” Keith head coach Clifton Reeves said.
“Second place overall? It’s hard to complain about that, especially when you know your guys gave you everything they had.”

Jeremiah Campbell nearly added a third medal for the Bears, but finished fifth in the boys’ 200-meter dash.