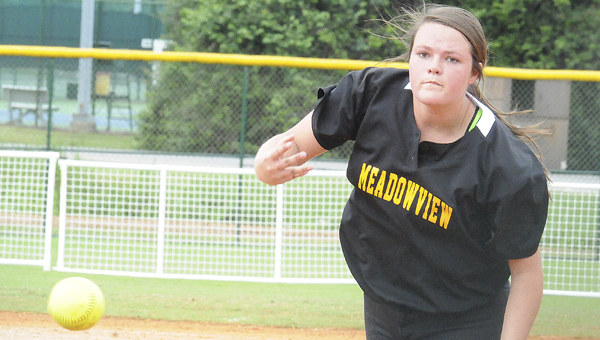 Meadowview Christian pitcher Claudia Kendrick throws a pitch in the Trojans’ opening game Friday versus Edgewood Academy. The Trojans lost two of their three games and were eliminated from championship play.–Daniel Evans

MONTGOMERY — Meadowview Christian and Morgan Academy entered Friday with hopes of winning state championships in softball this weekend, but those hopes were dashed by the time day one of the Alabama Independent School Association tournament came to a close.

Both the Trojans and Senators played three games on Friday, but found themselves in the loser’s bracket and in desperate need of victories to climb their way through the tournament. Instead, Meadowview lost its final game of the night to Marengo Academy 10-1 and Morgan blew a big lead as Tuscaloosa Academy rallied for a 10-8 win to stun the Senators.

“I would have liked to see us score more runs, just have a more well-rounded offense” Meadowview Christian head coach Elyse McIntyre said.

The Trojans’ have been inconsistent, but streaky at the plate this year and on Friday it caught up with them. Meadowview scored only five runs in three games. The Trojans lost to Edgewood Academy 10-0 in their opener before defeating Patrician 4-3 in their second game.  Marengo delivered the final blow, jumping out to a large lead and holding off the Trojans the rest of the way.

But even on a day that saw their season end, there were several bright spots for the Trojans.

With the Trojans already up 1-0, Maggie Tipton hit a three-run home run in Meadowview’s win over Patrician. The home run ended up being the difference in a one run victory.

Claudia Kendrick, who started the first two games for the Trojans, was another bright spot, McIntyre said. After getting the loss in the first game, Kendrick pleaded with McIntyre to start game two, and once she took the mound she delivered.

“She knew what she had to do and she did a very good job,” McIntyre said.

The Senators won their first game of the day by rallying past Pike Liberal Arts for a 5-4 victory. Morgan fell to Macon East 5-4 in game two before watching Tuscaloosa chip away at a big deficit before topping the Senators 10-8.