DCHS with work to do to win state title 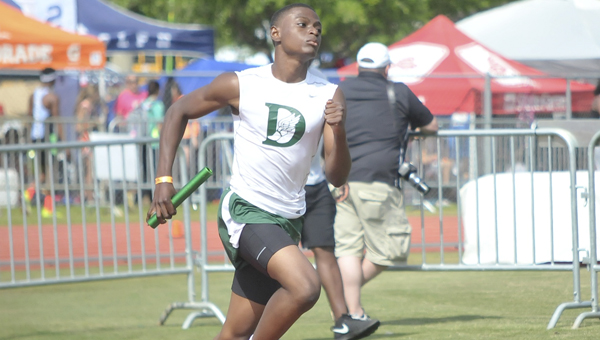 Dallas County High School is in 16th place in the men’s standings after day one at the AHSAA 4A-6A state track championships in Gulf Shores.–Tony Whitehead

GULF SHORES — Dallas County has a lot of work to do if it hopes to win a state track championship this weekend.

The Hornets went into the AHSAA’s Class 4A-6A state track and field championships in Gulf Shores with hopes of winning it all, but after Friday Dallas County is well back in the pack.

Dallas County sits 16th in the men’s overall standings after day one, where a total of eight finals were completed.

“It will take a lot of doing tomorrow,” Dallas County head coach Robert Dolbare said. “We are going to have to make sure we score as well as we can in every event  that we are in, but the goal of the entire weekend is to walk away state champions.”

With dozens of other finals upcoming on Saturday, the Hornets will have plenty of changes to make up ground. Dolbare, despite his the deficit his team faces, was happy with their performance on day one of the meet.

Knight, Parker and Mundell will try to sweep the podium for the Hornets on Saturday, which would be a big boost to the Hornets’ hopes of placing high in the men’s standings.

Knight also placed sixth in the preliminaries of the boys’ 4A triple jump and Austin Williams finished sixth in the final of the Class 4A boys’ 400-meter dash.

UMS-Wright leads the overall Class 4A boys standings with a total of 69 points.

Dadeville High School is second with 29 points, followed by Brooks with 21 points.

Dallas County has six points going into the second day of competition.