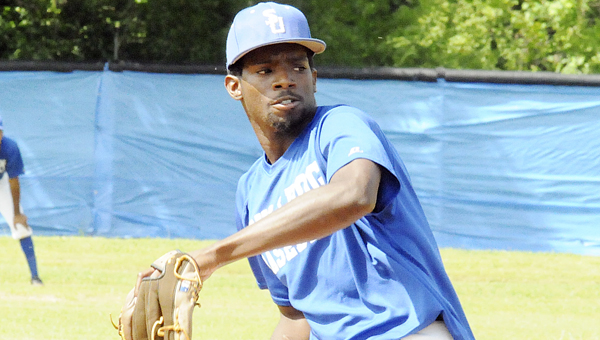 Selma University pitcher Tarus Hervey throws a pitch in the Bulldogs’ scrimmage game Wednesday. Selma, which finished second in the final USCAA standings, are hoping to earn a bid into the Small College World Series, which begins May 11 in Springfield, Ill.–Daniel Evans

With its regular season over with, the Selma University baseball team is using this week to refocus as the United States Collegiate Athletic Association’s Small College World Series nears.

Bids for the World Series will be announced Friday and Selma University, based on its second place finish in the final USCAA standings, seems likely to earn a bid. The mission for the Bulldogs now is to stay focused with a 15-day break between games — which has been an all too common problem for Selma this season.

“I don’t like to make excuses but the breaks we have had between games, the weeks off, cancellations – it dampened the spirits of the guys a little bit,” Selma University head coach Adrian Holloway said.

The breaks are nothing new for the Bulldogs, who have already had a break between games this year that stretched from March 18 until April 10 due to rainouts and cancellations.  Between April 11 and April 18, Selma had eight games canceled, taking the team out of its rhythm. When Selma took the field again, the Bulldogs lost three of their final regular season games.

“Our last few games have been closer than we are used to playing,” Holloway said. “In the last three games we lost we just didn’t play our type of baseball. We didn’t play our game. We were a little off, we were rusty and we didn’t get the job done.”

Holloway said losing before the tournament, which will run March 11-15 in Springfield, Ill., is not necessarily a bad thing for his team.

“I think the losses woke us up and it is weird, but I am kind of glad we lost before we went to the tournament,” Holloway said. “It was like that coffee break. It wakes you up. You can lose to anybody, so we have to bring our A-game every day.”

If the approaching World Series hadn’t done the trick, Wednesday’s practice probably helped the Bulldogs find their focus. A scout from the San Francisco Giants was in the audience, watching the Selma players go through batting practice and play a scrimmage game.

“Everybody tries to turn the switch on when the scouts come,” Holloway said while laughing. “That’s why I always preach turn your switch on every day, because you may try to keep it off and then you want to turn it on and your bulb blows.”

Holloway is hoping the Bulldogs avoid that fate in the World Series, which will include a field of teams the Bulldogs likely have not faced this year. He said his team has been focused on winning Selma University’s first baseball national championship all season and with the World Series looming, that remains the team’s focus.

“We are speaking it into existence,” Holloway said. “We want to go up there and we want to win and nothing else.”

Panthers focusing on basics during spring

Southside High School spent Wednesday’s practice going over the fundamentals of tackling. The team is using practices to prepare for... read more