Authorities are searching for a man wanted in connection with a shooting that injured two Selma men early Wednesday evening. 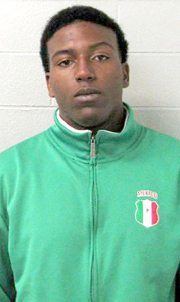 In a news release, Lt. Curtis Muhannad, with the Selma Police Department, said warrants have been issued for Lavonte Cardell Conn for two counts of attempted murder and one count of robbery 1st degree following the incident that occurred on the 2100 block of Forrest Street.

Thursday, Muhannad said officers from the Selma Police Department responded to a call about two shooting victims at the Forrest Street location at 7 p.m. Wednesday.

During their investigation, officers discovered the shooting occurred when Conn approached the victims who were sitting together in a parked vehicle.

Muhannad said Conn approached the passenger’s side of the car, produced a pistol and told the victim to had over everything he had.

In the release, Muhannad said a struggle ensued, during which Conn shot the victim in the back and stole a bag containing what authorities believe to be marijuana.

The driver of the parked car exited the vehicle and began to chase Conn on foot.

The driver was shot three times before being able to take back the stolen item and wrestle the Taurus .38 Special handgun away from Conn, which was out of ammunition at that time.