Panthers focusing on basics during spring 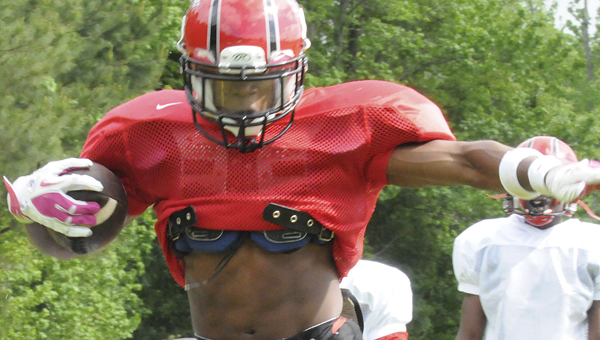 Southside High School spent Wednesday’s practice going over the fundamentals of tackling. The team is using practices to prepare for its spring game on May 15 at Central Tuscaloosa.–Daniel Evans

Southside High School will deploy a new, spread attack on offense on the gridiron this fall, giving the Panthers a lot to work on as spring practice got underway this week.

But even with large changes coming under new offensive coordinator Nicholas Andrews, Southside head coach Daniel Flowers is keeping it simple this spring.

“Our main focus is learning the plays … and learning the basic fundamentals,” Flowers said.  “Today we are going to go over tackling. Basically we are learning [what you learn in] midget league football — how to tackle.”

Flowers said with so many new faces on the field for spring training, the Panthers are spending a lot of time going over the basics of football. Wednesday’s practice was no exception, with players rotating through stations where coaches showed them how to correctly wrap-up and make a tackle in different scenarios. One station worked on open field tackling and each went over a different aspect of correctly bringing a player to the ground.

Flowers said the Panthers are having to spend a lot of time going over the basics of football, which are things players typically learn in youth football programs.

Without a “feeder program” near Southside High School, many players aren’t learning how to play football until middle school, Flowers said.

“When you lack the feeder programs it hurts you,” Flowers said. “I’ve noticed we don’t have a midget league football program in this area, so kids aren’t really seeing football until they get to middle school and that is hurting us so much.”

It also doesn’t help that the Panthers continue to get younger every year, Flowers said.

“It’s starting to be a trend at Southside that we have more young kids than old kids,” Flowers said. “Once a kid gets a junior or senior they stop wanting to participate in sports. I find that hard to believe that you’d play your whole career and then stop wanting to play once you get older.”

On the other hand, Southside does have a lot of experience back from last year’s team, which went 3-7.

“We’ve got a bunch of new faces out here and we have a good nucleus of guys that have been here before,” Flowers said. “We’ve got back our quarterback, our running back, we’ve got three offensive lineman back and all four of our defensive lineman back. We’ve just got to break in a new secondary.”

Even the secondary is getting a makeover, with Southside athletic director Cedric Brown returning to the gridiron after a two year hiatus. Brown will coach Southside’s defensive backs and wide receivers.

Brown, who has entertained the crowd by serving as the Panthers’ public address announcer at football games the last two years, is bringing his energy to the field this season.

“He’s out here and he’s ready to roll,” Flowers said.

Once players learn the basics, Flowers plans on spending the rest of the spring focused on Andrews’ new offense, which he hopes will put the Panthers’ athletes in space where they can be in more one-on-one situations — resulting in more points on the scoreboard for Southside.

The Panthers will play their spring game at Central Tuscaloosa at 7 p.m. on May 15.

Athletes from Falkville High School, located in north Alabama, prepare for one of their relay events during last year’s Class... read more