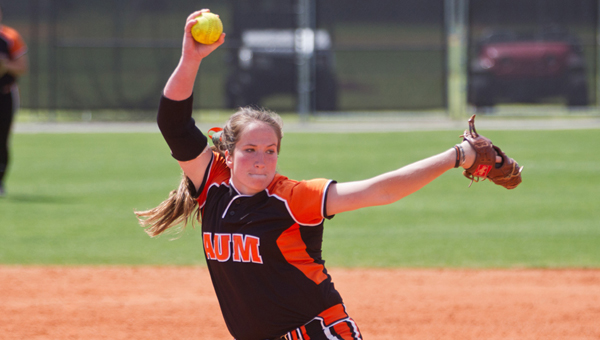 Auburn University at Montgomery pitcher Cassie Daniels throws a pitch in a game earlier this season. Daniels, who helped lead Dallas County High School to the 2011 state championship, has thrown nine shutouts this season despite battling an arm injury that will require surgery after the season.–Marvin Gentry | AUM Athletics

By looking at her stats, Auburn University at Montgomery pitcher Cassie Daniels is having a remarkable season, but numbers never tell the entire story.

Daniels, who led Dallas County to the 2011 Class 4A state softball championship, leads the National Association of Intercollegiate Athletics in lowest opponent batting average and fewest hits allowed per nine innings and is one of the key cogs on a Warhawks’ team that just wrapped up a 36-4 regular season.

But Daniels’ junior season has been her toughest yet at AUM.

Before the season she was diagnosed with an avulsion fracture of the ulna, which is one of two long bones in the forearm and doctors recommended surgery — which would have ended her season before it began. Daniels decided to put the procedure off until after the season.

“At the beginning of the season, I just wanted to be able to contribute,” Daniels said. “Even if I wasn’t going to be as good as I was last year and all I was going to do was eat innings for [fellow starting pitcher] Taylor [Powell] then that’s what I wanted to do.”

Daniels has done more than contribute, pitching in 21 games this season and throwing nine shutouts. Before the season, Daniels’ doctor recommended she redshirt, but after discussing it with teammates, family and her coaching staff she decided to pitch. Doctors told her to take it easy, which has limited her in practice and stopped her from doing extra work — which Daniels said has been very frustrating.

“That’s been one of the worst parts because last year if I was throwing bad or my control was off, I could stay after and throw,” Daniels said. “I could spend way more time throwing. This year I had to try to get my endurance up by swimming.”

To compensate for the injury, Daniels has adjusted her pitching style. In the past, she has used a riseball to blow past opposing hitters to get strikeouts. This season, she is throwing a dropball more frequently, which has created more groundballs and fly balls.

“The riseball is more of a strikeout pitch than a dropball, but I have thrown a ton more dropballs this year and I have gotten strikeouts on them,” Daniels said. “Even the ones I don’t strike out are bloopers to third or bloopers to shortstop. They are easily fieldable balls.”

Chris Steiner-Wilcoxson, the head coach of UAM, said Daniels’ performance this season has shown how tough the junior pitcher is.

Steiner-Wilcoxson said Daniels has matured a lot and has become one of her team’s leaders.

“She knows it is do or die every day for her and she knows the game rides on her shoulders,” Steiner-Wilcoxson said. “She gives us a chance every game to win it and to keep the other team off the board while we try to score.”

The Warhawks finished their regular season ranked No. 2 and will host one of ten softball regionals around the country on May 12-14.

Daniels has surgery scheduled for early June, which would follow the NAIA softball championships, which will take place in Columbus, Ga. May 23-29.