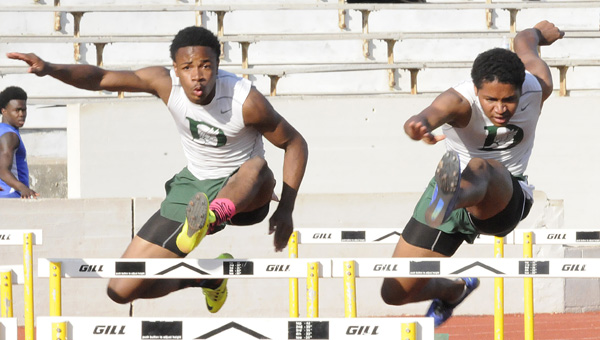 Several local schools will be participating in this weekend’s Alabama High School Athletic Association track and field championships in Selma and Gulf Shores after qualifying in sectional meets all over the state last weekend.

Dallas County, which is having one of the most successful track seasons in school history, will be the local team with the most athletes participating in state championship events after an impressive showing at its sectional in Montgomery.

“My kids exceeded my expectations,” Dallas County head coach Robert Dolbare said. “They competed extremely hard throughout both days. Some of their hard work throughout the season paid off in sectionals and we need it to pay off next Friday and Saturday in Gulf Shores.”

Dallas County exceeding Dolbare’s expectations may be putting it mildly.

“I was surprised by how well our 4×400 meter relay team ran. I knew they had the ability all year to do it but to see them do it really makes you proud as a coach,” Dolbare said. “I also was very proud of our male hurdlers for being able to finish one, two, three in the 110-meter hurdles. That’s a goal we set many months ago and it seemed often unattainable, but to see us do that was a pretty memorable moment.”

Ben York and Austin Williams qualified in the 400-meters, Kareem Ross qualified in the high jump and Caleb McDougal will compete in the discus. The boys 4×100 and 4×800 relay teams will also participate in Friday’s state championship races.

Though they aren’t represented as well as the Hornets will be, several other local teams also will compete in the championships.

Selma will join the Hornets in Gulf Shores, but the Saints will only have one athlete competing.

Daisha Simpson made the cut for the Saints in the shot put after a throw of 28 feet. Simpson might have been joined by teammates, but Selma was disqualified in the 4×100 girls’ relay race during sectionals due to a bad handoff.

Keith High School will be the local team most represented at Memorial Stadium for the Class 1A-3A championships and will theoretically be the home team in the event, based on the Bears numbers compared to the other schools from Selma-Dallas County.

“Being at home, you get more of the kids’ families and the school to come out and see them,” Reeves said. “It’s just a boost when you don’t have to travel. It’s pretty much a home field advantage because we should pick up a lot of local fans too that don’t travel with Dallas County or Selma.”

“Our expecations are high,” Reeves said. “We feel that from our performance in sectionals that we can place really high in this state meet.”

Southside’s girls will also have a team at Memorial Stadium after the Panthers qualified in the girls’ 4×100 relay.

“Even though they’ve got somebody running beside them, I want them to know they are always running against time,” Southside head coach Samantha Brown said.

Selma’s Janie Mothershed ties her shoe at Memorial Stadium at earlier this year in the middle of a training run... read more