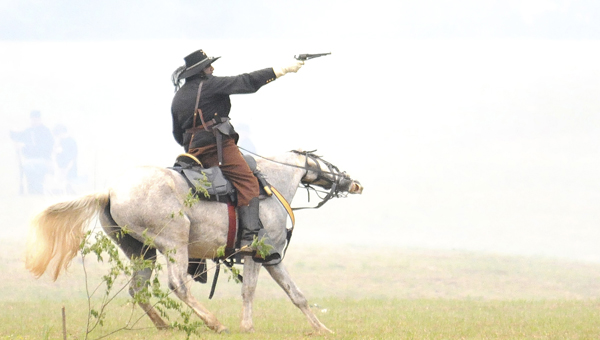 A confederate calvary solider fires a pistol at union troops Sunday during the Battle of Selma re-enactment. (Josh Bergeron | Times-Journal)

Selma’s total population saw a momentary increase during Battle of Selma events, but it’s unclear whether the tourist traffic will translate into increased sales tax revenue for local government, according to city and county officials.

The event drew thousands — more than 1,000 during its Living History Tours alone. About 600 traveled to Selma as re-enactors and hundreds more as spectators. The re-enactment is now more than 20-years-old and has become an annual staple of Selma’s economy.

Though he expected visitors to contribute to sales tax revenue for city and county government, event organizer James Hammonds said an additional source helped to boost income for area businesses.

“When we initially started, we expected the spectators to be the primary source of revenue, but the re-enactors have also been an important contributor as well,” Hammonds said.

Since the event began in the mid 1980s, Hammonds said re-enactors have traveled from as far as Sweden and Germany to relive the historic battle.

Organizers said the 2014 re-enactment drew one of the largest crowds of spectators ever.

“We always hope we will see an increase,” Evans said. “The Battle of Selma and The Bridge Crossing Jubilee have not shown any increase in revenue. It is very frustrating and it is something to be concerned about, but we are working on finding out why.”

In a previous interview with the Times-Journal, city councilman Cecil Williamson said the decline is part of a larger trend of declining sales tax revenues within the city.

Battle of Selma visitors and re-enactors aren’t the only source of revenue for city government, but declining sales tax revenue could be partially tied to an overall decrease in the amount of re-enactors and merchants that attend the event.

Alberta Millwood, who regularly attends the re-enactment as a merchant, said attendance in the 1990s was significantly greater.

“Sutlers, [or merchants], used to be lined up all around the battlefield, even going into the woods,” Millwood said. “There were more than 1,500 re-enactors at one point.”

County government also receives a portion of sales tax from local businesses. Dallas County Probate Judge Kim Ballard said it would be difficult to directly tie the re-enactment to a decrease in sales taxes when 2014 sales tax returns are in.