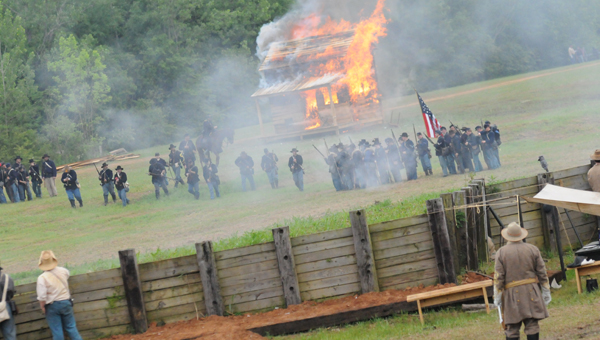 In 1865 Union forces, led by Maj. Gen. James H. Wilson, captured Selma during the civil war, but 149 years later hundreds of men gathered at Riverside Park to put history on display and re-enact the battle.

The battle drew nearly 600 re-enactors and hundreds of spectators to the park.

Following the battle, event organizer James Hammonds, who was also a confederate re-enactor, said he was pleased with how the weekend went.

“[Sunday’s battle] started out kind of slow, but it picked up and then we had a crescendo at the end,” Hammonds said. “There were a lot more horse-drawn artillery on the [Union] side and they gave a good pounding on the right side of the battery.”

Similar to generals in 1865, Confederate commander Gen. Ken Sumner and Union commander Joe Way spent said they significant amounts of time planning. Way said poring over historical accounts of the battle before Sunday’s event was a vital part of putting on a top-notch re-enactment.

When the battle began, Confederate forces captured a wagon with two civilians in it and then made repeated charges across the battlefield, firing at Union troops. The Union forces set a wooden cabin, in the middle of the battlefield, on fire as they advanced, symbolizing the burning of Selma, according to Way.

With the burning cabin at their back, Way’s forces charged over the eastern section of earthworks — a long, winding wooden wall — and capturing a portion of the Confederate troops.

Union cavalry troops also charged through the confederates’ western defenses, squeezing Sumner’s forces into a dirt bunker, where they surrendered.

After the battle, event organizer Bennie Austin also said he was please with the weekend’s events, but rain and a flooded Alabama River threatened the re-enactment early on.

“We were initially concerned with the high river and flood waters, but we were very blessed that they receded quickly and we were able to have the event as planned,” Austin said. “I think it was a great success and one of the better crowds that we have seen.”

Re-enactors came from around the country, though many were from the South East. Confederate re-enactor Cliff Burkett, in his third year, said his initially became interested several years ago after talking to a friend about the experience.

“My friend would bring the cannon up and we would shoot it and that’s kind of how I got involved,” Burkett said after the battle. “You learn something new everyday — new techniques and just how they did things back then. I remember when I first came in to it I was a little nervous and didn’t really know too much about being a re-enactor.”

Next year marks the 150th anniversary of the Battle of Selma. Austin said plans for the historical anniversary are already under way.

“I’ll just say there are some surprises in store for next year and we will leave it at that,” Austin said.

Fight for Selma begins during Saturday’s Battle of Selma events

Mount up: With union soldiers at their back, re-enactor Col. Sean Paul (bottom right) and confederate forces retreat during a... read more