Johnson camp yet another success 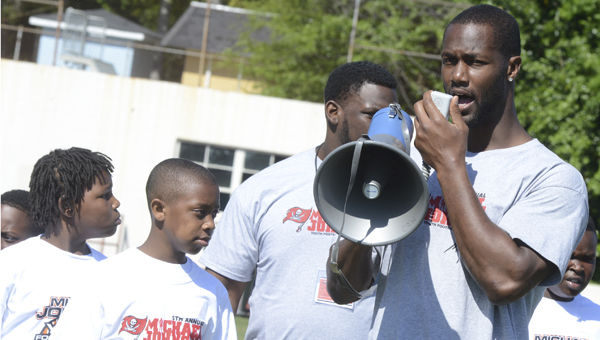 After months of planning and preparation, the fifth annual Michael Johnson Youth Football and Cheer Camp took over Selma’s Memorial Stadium Saturday and Johnson said he was happy to see the hundreds of young football players and cheerleaders on hand.

“It feels good to be back home and to know they are appreciating what we are doing to get everybody out here,” Johnson said. “A lot of people don’t understand how much goes in to putting something like this together, it takes time and it takes effort. And without the communities support, it wouldn’t be possible.”

While Saturday’s camp featured Hollywood celebrities and players from the National Football League, Johnson said they were not the stars of the show.

“It wouldn’t matter who would be coming, if the people here didn’t do their part. I’m thankful for all my friends that came down, but I’m even more thankful for the people who are right here at home that joined in and helped,” Johnson said. “Everybody has been so supportive and helpful and it’s just been a blessing and I’m just thankful for everybody that’s been a part of this.”

While lessons on tackling strategy, running footwork and cheerleading were shared on the field, Marion resident Ramona Clemons watched from the stands as her grandson LaPaul Sewell took in his first camp.

“He was pretty excited,,” Sewell said. “He got up this morning and didn’t eat breakfast. I think it is just exciting to see the children enjoying themselves and today has just been so well organized. It’s a wonderful thing they are doing.”

Along with the celebrity assistants from Hollywood and the NFL, Johnson also enlisted help from friends he met over his years living in Cincinnati, where he had played football professionally with the Cincinnati Bengals.

Shifra Burton is an engineer with Proctor and Gamble in Cincinnati and worked a science booth for kids during Friday’s NFL FunFest at the stadium and spent Saturday helping the aspiring cheerleaders learn the tricks of the trade.

“Going back to when he was living in Cincinnati, we have supported each other in our different endeavors and so I felt it was important to come down and be here this weekend,” Burton said. “I think it’s super cool for Selma to want to come out and support this event, and things like this that show the kids that education is as important as athletic talent.”