Fight for Selma begins during Saturday’s Battle of Selma events 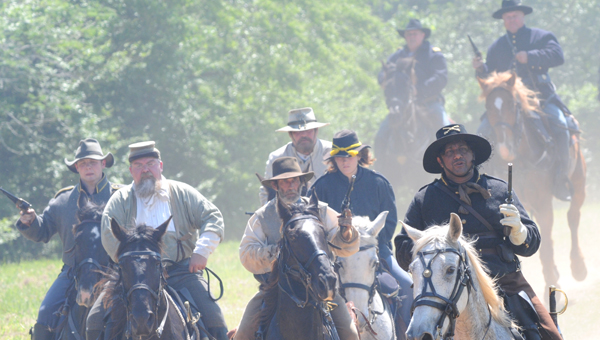 Mount up: With union soldiers at their back, re-enactor Col. Sean Paul (bottom right) and confederate forces retreat during a Battle of Selma skirmish on Saturday. The skirmish was the first of two battles. The second will be the Battle of Selma re-enactment on Sunday at 2 p.m.. (Josh Bergeron | Times-Journal)

Confederate soldiers repelled Union forces Saturday during a skirmish before the Battle of Selma.

Sumner’s troops were pushed back several times and were slowly pushed toward Valley Creek. With cannon’s at their back, Union forces, led by Maj. Gen Joe Way, were able to momentarily commandeer the Confederates eastern artillery positions.

Sumner’s forces stormed back, repelling Union troops back into an open field and eventually forcing Way’s soldiers to retreat.

“We can’t guarantee that we will hold Selma, but we are certainly going to do our best,” Sumner said after the skirmish.

At one point during Saturday’s skirmish, a couple on a horse-drawn wagon wandered onto the field. Confederate forces seized the wagon.

The skirmish was a precursor to the Battle of Selma’s reenactment on Sunday. Sumner said Saturday’s skirmish represented a battle that occurred on April 1, 1865, just before the Battle of Selma. The re-enacted skirmish took an hour and included more than 600 soldiers. Following the battle, re-enactors were visibly tired and Sumner reflected on the actual battle conditions in 1865.

“We re-learn what they did everyday,” Sumner said. “Not just when it was convenient or when it was Saturday or when it was Sunday of next week. They would wear the same clothes until they literally rotted off of their bodies.”

To a degree, event organizer James Hammonds says the re-enactment is a large outdoor play. And just like a general in 1865, Sumner analyzed his troops actions after Saturday’s skirmish.

“Things didn’t quite go as we had planned in our original scenario, but that’s not unusual,” Sumner said. “The actual battles [in 1865] didn’t go as planned either. It reinforces, again, to us, the history behind what we are trying to portray.”

Re-enactors weren’t the only ones in Riverside Park Saturday. Conferderate and Union forces were joined by hundreds of spectators.

Hammonds said both the number of re-enactors and spectators pleasantly surprised him.

“I think we actually increased our numbers on both sides from last year on Saturday,” he said. “We had a pretty good showing. Sunday usually will be our biggest day.”

Hammonds said spectators could look forward to perhaps the most historically accurate re-enactment of the Battle of Selma ever on Sunday.

“It should look like what the soldiers [in 1865 wrote about in their diaries,” Hammonds said.