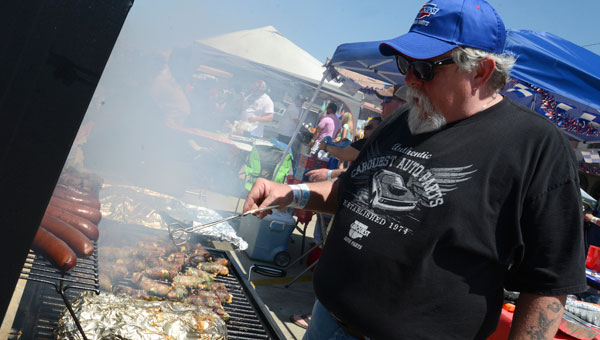 A tasty tradition returned to Selma’s Water Avenue Saturday as community members came out to sample the food and take in the live music that have become hallmarks of the annual Rock ‘n Ribs fundraiser.

BBG members and event organizer Clay Carmichael said he was more than happy with the community participation at Saturday’s daylong event.

“We had 13 teams sign up this year and that was good. We had six the first year, nine last year and thirteen this year and that is closer to our eventual goal of 20,” Carmichael said. “We hope this catches on and we can show what non-profits, or even companies, can do as far as hosting community events in Selma.”

Carmichael said one of BBG’s main goals for the event is to make it family-oriented, so along with the live music and abundant plates of ribs and other grilled items, there was a bounce house and portable climbing wall.

Valley Grande resident Glenn McPhillips and his daughter Ashley made their way through the crowd early Saturday afternoon, enjoying the food and the chance to support the charities that would benefit from the event.

“We just wanted to support any great organization in Selma we can,” McPhillips said. “We’re just happy to be out on Water Avenue.”

With the sun beating down and temperatures climbing into the 80’s, patrons sought out beverages and shade, both of which Side Porch Sandwiches and Pub owner Dianne Smitherman was happy to offer.

Between serving drinks at her restaurant’s bar, Smitherman said events like Rock ‘n Ribs are crucial for the vitality of Selma’s downtown.

“When we have the chili cook-off, the rib cook off and the wild game cook-off it is always great for business. Today, we aren’t doing much for our business; we are just accommodating the rib off organizers with a little extra space,” Smitherman said. “It’s extremely important for the city of Selma to have events like this on Water Avenue so tourists will stay here longer and Selma residents will spend more time downtown.”

Maj. Gen. Joe Way looks over maps Friday in preparation for this weekend’s reenactment of the Battle of Selma at... read more