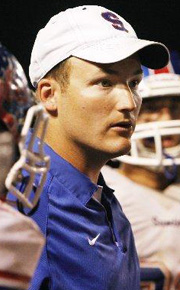 Wingo, who coached two years at Sumter Academy and had a record of 6-15, is replacing Senators’ athletic director Bob Taylor as Morgan’s football coach. Wingo played football at the University of Alabama before having his career end as a redshirt freshman after suffering his third concussion.

“I think it is a good deal for both of us,” Morgan Academy headmaster Martha McKnight said. “He sees it as a learning experience for him. We see it as someone that will come in with some new ideas that will make us stronger and better.”

McKnight said Wingo is planning to coach the Senators through spring training, which is scheduled to start in early May.

“I think discipline is important to him and he seems to be very disciplined himself with the way he does things,” McKnight said. “I just feel like he will be a good addition to what we already have.”

McKnight said she was most impressed with two things about Wingo. First of all, every reference he listed returned her call and had positive things to say.

“I think he is going to be an excellent model,” McKnight said. “He lives what he talks. He doesn’t just say it, he lives it.

The Senators went 3-7 this past season under Taylor, who went 6-14 in his two seasons as the head football coach for Morgan.

McKnight said the coaching change is not a reflection on Taylor’s record with the Senators. If he chooses, Taylor could still possibly work with the football team as an assistant coach, McKnight said.

The Senators have only had three winning seasons in the last eight years, so McKnight is hoping Wingo can get Morgan’s program turned around.

The hope is that under Wingo, the Senators are back in contention for a state championship sooner, rather than later.

**Wingo’s photo was provided by the Tuscaloosa News. The photo was taken by Erin Nelson.