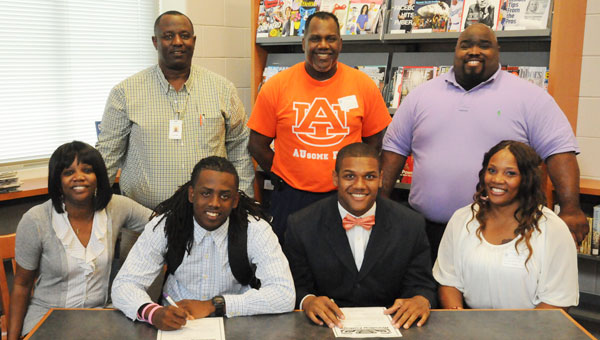 Bruno and Smith signed letters of intent Wednesday to play at Reedley College in California. Reedley, a junior college about four hours from downtown Los Angeles, has been recruiting Bruno and Smith for over a month after seeing each player’s highlight film on the recruiting website Hudl.

“They made a tough decision to go so far away from home,” Selma head coach Leroy Miles said. “It is an opportunity of a lifetime for them. I’m very excited about those kids getting an opportunity to play college football, because these two kids have been with me for four years.”

Miles said he gave both players a little advice when they made the decision to move over 2,000 miles away from home.

“I told them you won’t be able to walk home and that they need to prioritize,” Miles said. “I told them put God first, education second and football third and you’ll be successful.”

Bruno started for Selma this season at running back and was recruited to play there in college. Now, he’s prepared for a new challenge.

“It is going to be a great experience to take on the outside world by myself without being around any family, so I think it is a great opportunity for me to experience what it is like to be on my own and take care of myself,” Bruno said.

Miles moved Smith to tight end before the season in hopes of getting him a collegiate scholarship, but it ended up being his original position — defensive end — that peaked Reedley’s interest.

“I worked my whole life for this moment,” Smith said. “I’ve been wanting since middle school to play at this level of football so it really does mean a lot.”

Smith said he will major in photography at Reedley College.

Both players said they would like to transfer to a four-year school after two years at Reedley. The junior college has sent 22 players to four-year schools over the last four seasons, according to the Reedley College website.

Neither athlete has ever been to California, but the duo will only be around 20 minutes from Selma, Calif., a city that by name alone may keep their hometown close to mind.