The Dart: Firefighters train for when the call comes 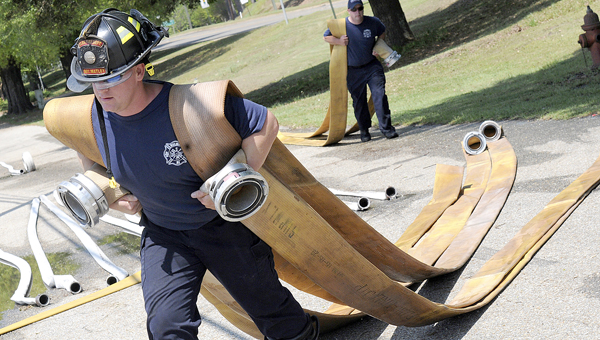 The Selma Fire Department spent their Wednesday morning preparing for an emergency.

The department conducted a regular hose test Wednesday at Bloch Park to make sure that all of their hose equipment on their station No. 4 truck is fully capable of extinguishing even the most intense fires. The hose test is just one of the many duties the firefighters must do to ensure they are ready to leap into action when it’s time to respond to an emergency call.

“At a maxim of 300 feet, we hook the hose to the truck, and we run it through a series of pressure with up to 200 [pounds per square inch] of pressure,” Selma Fire Department Capt. Aeneas Pettway said. “We run it for five minutes, and then run it for another 10 minutes to make sure that it will hold that pressure.”

With an exception of a few failing hoses in past years, Pettway said their equipment, like the equipment tested Wednesday, often does passes the annual test.

Pettway, who has been in the fire service for 17 years, said the general public tends to have the misconception that department has a lot of free time since fires aren’t an everyday occurrence. He said the crew has to dedicate the 24 hours of work every two days to preparing for a serious situation, which can include cleaning the station, training, conducting fire prevention events, hose testing, pump testing and more.

“You can never have zero risks in this job,” Pettway said. “There will always be some risks, but what we do is we try to minimum it as much as we can.”

Pettway said mentally preparing for an emergency is just as demanding as the physical preparation, if not more.

“When the [alarm] goes off, you have to drop everything mentally that you are doing and focus on the job at hand,” Pettway said. “Sometimes we know what we’re going to, but a lot of times we don’t.”

Selma Fire Department Capt. Gabriel Sharpe, who has been a firefighter for 16 years, said it’s important to not lose sight of the standard operating procedure, even if the situation is hectic.

“You can’t get tunnel vision when you’re coming up on it [emergency situation],” Sharpe said.

For Sharpe, the hardest aspect of his job is the limited time he gets with his family.

“I like to be at home with son. I like to tuck him in at night, play with him,” Sharpe said. “That’s the toughest thing to me … being away from my family.”

VALLEY GRANDE — Less than two weeks before it was scheduled to take place on May 3, Valley Grande’s annual... read more