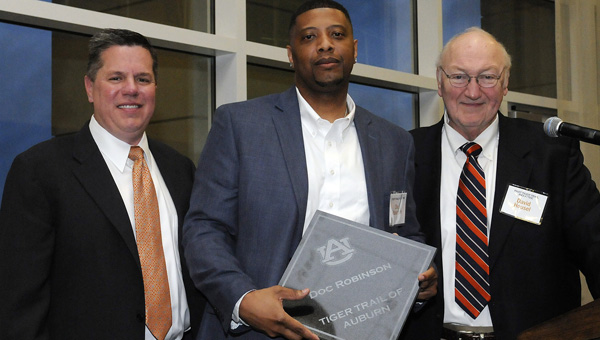 Chuck Gallina, Doc Robinson and David Housel pose for a picture at Friday night’s Tiger Trail Induction Ceremony. Robinson, who played for Selma High School and helped lead the Saints to the 1994 Class 6A state championship, was inducted into the Trail Trail Friday night with six other former Auburn athletes.–Daniel Evans

Robinson, who led Selma to the Class 6A state championship in 1994 and was a member of the winningest senior class in Auburn history with 85 victories, was one of six former Tigers honored.

“It is just a great honor to even be mentioned and being recognized with some of the Auburn greats and some of the great athletes that contributed to Auburn athletics,” Robinson said about his induction. “My name being a part of that, a kid from Selma, it’s wonderful. Words can’t even express how excited I am that they even thought to recognize me at that level.”

Robinson is one of only two first-team All-Americans in Auburn history and he is a two-time first-team All-SEC selection. Robinson led the Tigers to the Sweet 16 as a junior in 1999, when he averaged 11.5 points per game and five assists per game.

“Every time I watch college basketball or I go to an Auburn game, I kind of have little flashbacks,” Robinson said. “When I was there at Auburn, there were a lot of fun times, a lot of great stories.”

During his senior season, Robinson led the Tigers to the second round of the NCAA Tournament and had them positioned in the top-ten of the polls most of the season. He said his four years as a student athlete at Auburn taught him several life lessons that he uses in his every day life.

The former Auburn point guard, who now lives in Atlanta and works in logistics, said he wishes he could find time to make trips back to Selma more often.

“I wish I could get back more,” Robinson said. “I stay in touch with everything through my parents, my mom and dad, and some of my relatives that are still there, so I still have my fingers on the pulse.”

Trojans hoping experience will come in handy in tournament

After a great regular season, Meadowview Christian (13-6) is gearing up for what the Trojans hope is a deep postseason... read more