Bridge project on pace to be ready next week 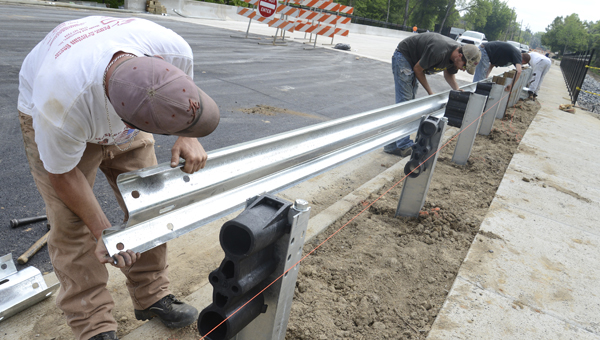 Michael Hartley, left, holds up a section of guardrail while it is installed near the Dallas Avenue bridge project late Tuesday morning. — Jay Sowers

With a week left before the original May 1 deadline for work to be completed on the bridge over Valley Creek on Dallas Avenue, ALDOT district manager Rex Thompson said the project is on schedule to be completed in time.

“We’ll still make that if the weather will hold out,” Thompson said. “A lot of things could still happen, but it is still set for May 1.”

With work still remaining on concrete barrier walls, fencing and lane painting, Thompson said the workers are set to be finished in time for next Thursday’s deadline, barring wet weather.

“Weather could come in and rain and it could hold us up, and really good weather could let us get ahead,” Thompson said. “But we are sticking with the May 1 deadline.”

Kay Traylor owns Frames ‘n Things, a framing shop located less than half-a-mile east of the bridge on Dallas Avenue, said she is more than ready for the roadwork to be complete so business can return to normal.

“I’m looking forward to the first of May, let me tell you. I’ve been ready for this for about nine months now,” Traylor said. “Our business has truly been devastated by it. There has been nobody passing by and we aren’t getting the folks who stop at the light and think they need to stop in for a quick gift. That’s what’s hurt me.”

Traylor said rumors surrounding the project’s completion date arriving both earlier or later than May 1 have played with her emotions, but she’s has tried to work one day at a time.

“You get to the point, after hearing all the rumors, where you just take each day as it comes and … don’t worry about the rumors,” Traylor said.

Selma Mayor George Evans said the completion of the project would ease roadways that have been used as detours since the work began last year.

“It’s going to help traffic around town a lot. This will make a great difference in the wear and tear on the other roads,” Evans said. “It really is going to impact everything about our city in terms of events and tourism and activities.”

The Dart: Firefighters train for when the call comes