A Selma woman is in jail after Selma police charged her with a half-dozen crimes. 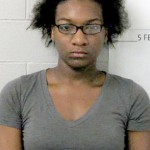 The process leading to Woods’ arrest began early Sunday morning, when Selma police were called to George Washington Carver Homes. Victims told police that Woods intentionally rammed her car into another vehicle several times. The vehicle contained an eight- and 11-year-old child, according to a news release.

According to the release, one of the children is suffering from headaches because of the incident.

Woods allegedly attempted to run over one female victim and assaulted a second during the incident.

On Monday, police interviewed the victims and found probable cause for Woods arrest on the six charges, the release stated.

Police spotted Woods in a 2004 White Chevrolet Trailblazer — the vehicle used in the Sunday incident — in a store’s parking lot on Monday, according to the release.

The vehicle was detained as evidence following Woods’ arrest.