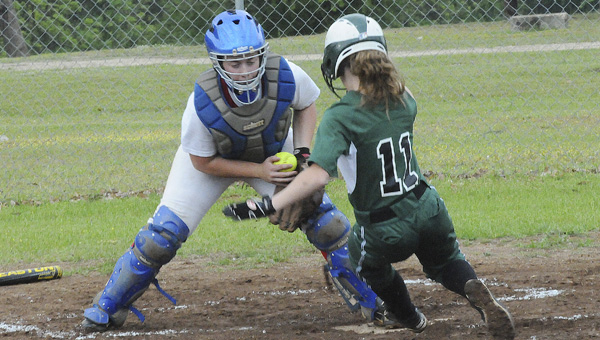 VALLEY GRANDE— Dallas County used a dominant pitching performance from Tori Hatfield Tuesday to keep Verbena at bay and the Hornets offense did the rest, knocking the ball all over the field in a 14-0 blowout victory.

Hatfield threw four scoreless innings but injured her ankle late in the game as a pinch runner when sliding into second base. Although Hatfield left the game and had ice on her foot for the final half inning, the Hornets seemed to avoid a major injury to one of their key players.

“The worst part of the day was having our pitcher get hurt,” Dallas County head coach Willie Moore said. “I’m not happy about that but I am happy that we were able to play a pretty good game and win it.”

Hatfield allowed the Red Devils only one hit in her four innings of work and the Dallas County offense provided all the support she needed on the bases.

Taylor Moore hit an inside the park grand slam — with a little help from the Verbena outfielders, who misplayed the ball on a sharply hit grounder that hopped to the center field fence— to break the game open in the bottom of the second.

The Hornets led 9-0 at that point and Amy Persinger added to it with a sacrifice fly to center, which scored Jala Hayes. The next Hornets batter, Yasmeen Green, doubled on a deep fly ball to score Brittney White, giving the Hornets an 11-0 lead after three innings.

“We ran the bases well; just did the little things better today than we did in the past,” Moore said of his team’s effort Tuesday. “We executed a lot better today.”

In the bottom of the fourth, the Hornets added to their lead when White singled to center field to score Brittney Brown and Persinger doubled, setting White up to score on a passed ball. Persinger eventually scored when Green was walked.

Moore put Hatfield in to run the bases for Green, but when stealing second the pitcher hurt her ankle and had to leave the game.

With Hatfield unable to finish the contest, Morgan Barrett came in to pitch for Dallas County and closed the game out by forcing all three Verbena batters she faced to ground out.

Moore was pleased with his team’s pitching, but was also very happy with how his team found some consistency at the plate Tuesday night to get a big win.

“We had a mixed up lineup today,” Moore said. “We had a lot of young girls out there that got some experience”

The Hornets are still winless in area play, but get another chance to pick up an area victory versus Tallassee Thursday at DCHS at 4 p.m.