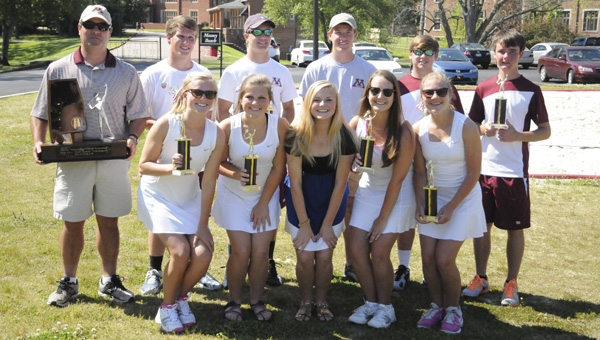 Morgan Academy’s tennis team poses for a picture with all of their trophies Monday after the AISA state tennis championships at Huntingdon College in Montgomery. Senators head coach Baxter Stinson, left, holds up the state runner-up trophy.–Daniel Evans

The Senators’ boys’ team was already guaranteed second place and wins over heavy favorite Tuscaloosa Academy could only help their cause and the Morgan girls were not in good position to win a state title, so they could relax and focus on winning individual championships.

Unfortunately, Stinson watched as the Senators lost all seven matches they took part in Monday, with most of the defeats coming at the hands of Tuscaloosa Academy, who won both the boys and girls AISA tennis state championships.

“I told the kids there was no added pressure and that they were playing for themselves,” Stinson said. “My hope is they will feed off this now that they were close enough to taste victory.”

The Morgan boys got to see first hand how dominant Tuscaloosa Academy was this season, falling to them in four matches. Tuscaloosa’s Mason Lake defeated Morgan’s Peyton Mathiews 6-3, 6-2 in a matchup of No. 1 players and Weston Hamiter rolled past Morgan’s Will Sherrer in a battle of No. 3’s. Blake Wright nearly shutout Morgan’s Elliot Osland 6-1, 6-0 in a matchup of No. 4’s and Tuscaloosa’s Hamiter and Blake Wright defeated Morgan’s Will Sherrer and Jordan Cothran in a boys’ No. 2 doubles match 5-7, 7-6, 6-2.

“I think we did pretty well,” Stinson said. “Tuscaloosa Academy is the three time defending state champions, so I have to give credit where credit is due.”

The Senators’ girls didn’t fare any better, with Jaylee Sautelle from Glenwood defeating Morgan’s Ellie Adams 7-6, 6-2 in a matchup of No. 4 girls and Glenwood’s Morgan Kennon defeated Halie Matthiews 6-0, 6-1 in a battle of each team’s No. 5 players.

Abby Flennor and Madison Elmore from Tuscaloosa defeated Morgan’s Emily Sherrer and Sophie Talton 6-0, 6-1 in a matchup of each team’s No. 1 doubles teams.

Even after a tough day on the courts, Stinson is excited about the future of Senators’ tennis.  Only three seniors graduate from the Senators’ top five girls or boys players — Connor Henderson, Jordan Cothran and Halie Matthews.

“I’m excited about the future with this young team,” Stinson said. “We have a lot of promising talent.”