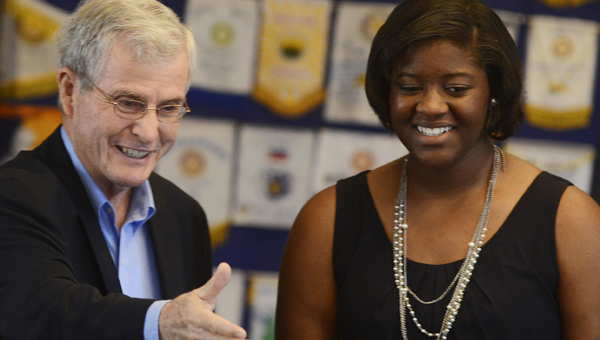 Dallas County High School senior Caitlin Moore has big plans for life after graduation, and a $1,500 scholarship she received Monday from the Selma Rotary Club will help make her dreams a reality.

Moore said she was stunned, not only when she was one of the seven local seniors who would be given a scholarship as part of Rotary’s educational scholarship program, but also when she learned she would be awarded the top prize.

“I was very excited when I heard I won,” Moore said following Monday’s Rotary meeting at the St. James Hotel. “It really hasn’t sunk in yet.”

One senior was picked from each of the seven high schools in Dallas County, and those seven students made presentations to Rotary two weeks ago about their accomplishments in high school and in the community.

Moore — the daughter of Linda and Willie Moore — said she was anxious to speak about herself during the earlier Rotary meeting, but support from her family and school leaders assured her she had nothing to be nervous about.

“I was kind of nervous coming down here for the last meeting, but once I stood up in front of everybody it just kind of clicked,” Moore said. “I’ve had a lot of support from my parents and everybody at school.”

Rotary member Michael Jung, who helped organize this year’s scholarship competition, said it was not an easy decision for Rotarians.

“We really had a tough time picking a winner because they were so good. It was rewarding and I’m proud of the Rotarians for finding such a deserving winner,” Jung said. “It’s important to us because we think these are the future of Selma, Dallas County and all the different communities in and around our area. These are the future leaders of the state and the country.”

Rotary president Troy Harville said the scholarships have become a highlight of the organization’s calendar.

“This is our single biggest contribution to the community and we have made it a priority,” Harville said. “It gives us a thrill to be able to give these scholarships. We’ve stepped it up over the years and we hope to be able to continue to do that.”

Along with Moore’s $1,500 scholarship, Rotary gave $1,000 to the second place winner, $500 for third, and $150 for the final four finishers. The scholarships are made possible by fundraisers held by Rotary throughout the year.

Dozens of guns ‘bought’ in buyback

Bishop Robert Pettus wasn’t sure if any of the guns turned in during a gun buyback event at his church... read more