It’s all about the pickle pop 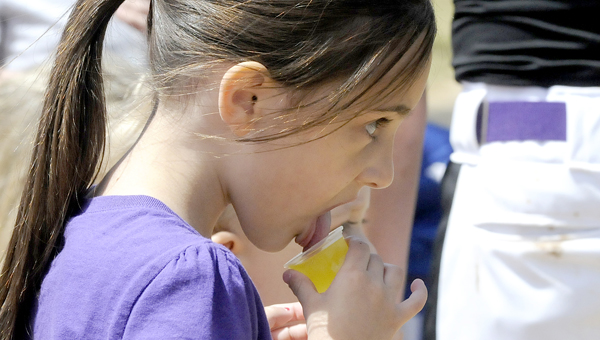 Thanks to a unique frozen treat, business at the Dallas County Sportsplex concession stand is booming.

The stand is full of every day ballpark goodies — such as hamburgers, hot dogs and candy — but all of them take a backseat to the pickle pop. The pops, which are made out of pickle juice and are sold in 1-ounce containers, sell for 25 cents and keep children coming back all day long.

“I have no idea why they are so popular,” Michele Stokes, who regularly works the concession stand, said. “Probably because they are a quarter. They are cold and when it is really hot is when we sell the most. It is cheap and cold.”

The concession stand makes an average of 200 a day and occasionally run out because the demand for the frozen snack is so high.

“The kids love this,” Stokes said. “They can come to the concession stand after their mommas give them a quarter or a dollar and you know that’s what they are getting. We have some children that come back ten times.”

The treats are so popular that it’s ironic that none of the workers in the concession stand who make the frozen snack like them.

As a matter of fact, most of them don’t like pickles at all and have refused to even try a pickle pop.

The customers who buy them, which are mainly children 15-years-old and below, know exactly why they buy them on a regular basis.

“I like pickles and I like icicles so it is a great mix,” 14-year-old and pickle pop enthusiast Dylon Smitherman said.

Still Employed?: Selma City School Superintendent of Education Gerald Shirley is pictured at a State Board of Education meeting in... read more